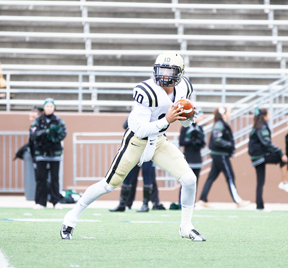 News file photo Former Nederland quarterback Sage Seay led the Bulldogs to a 6-5 record in 2014 and a share of the District 22-5A title.

Larry Neumann showed great confidence in his 2014 Nederland Bulldogs.
There was a reason to listen to the coach considering even after an 0-3 start, the team fought back to win a share of the District 22-5A championship. Last year was the fourth consecutive season the Bulldogs have won at least a share of the district title. Nederland won the previous three outright.
Nederland went 6-5 overall and 6-1 in district play in 2014.
The Bulldogs started 2014 with a 25-20 loss to Crosby, followed by a 44-22 defeat to Dayton and then Nederland fell 21-13 to Clear Lake.
It sent Nederland to the first 0-3 start in Neumann’s career that dates back to 1993.
Nederland rebounded to start the District 22-5A schedule with a 51-32 win over Vidor.
The only district loss was a painful one, a 57-56 defeat against Goose Creek Memorial in double overtime to end the Bulldogs 29-game district winning streak. The streak stretched back to 2010 when Beaumont Central took down Nederland 29-26.
The Goose Creek loss of 2014 was a shocker considering the previous three of the previous four games won by Nederland. Nederland defeated Beaumont Ozen 45-21, beat Beaumont Central 39-36 and took down Port Neches-Groves 35-28 to win the Bum Phillips Bowl Trophy. All three of those teams were playoff teams in 2014.
The week before losing to Goose Creek, the Bulldogs destroyed the Baytown Lee Ganders 46-7.
Goose Creek entered the game against Nederland 3-5 and 2-3.
Nederland’s season in many ways road on the back, legs and arm of quarterback Sage Seay.
Seay rushed for a team-high 1,153 yards and 16 touchdowns while also passing for 1,570 yards and 14 scores.
Austin Krautz exploded in the backfield for the Bulldogs with 1,103 rushing yards and 17 trips to the endzone. Krautz, who returns in 2015, led the Bulldogs with 41 receptions for 517 yards and seven touchdowns.
The Bulldogs averaged 412.4 yards per game while giving up 356.3 yards on defense.
Nederland scored an average 37.4 points per game while giving up 30.8 points on defense.