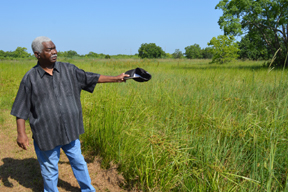 Port Arthur resident Cornell Brown points to high grass behind his Lavendar Street home that he believes is a breeding ground for vermin.

An expansive vacant lot behind Cornell Brown’s Palomor Addition home is far from the field of dreams he and his wife envisioned when they first moved to to the outskirts of Port Arthur years ago.
Instead, Brown, 67, and his wife Bernadette, 67, look at the field of high grass and grown up vegetation as a breeding ground for everything they don’t dream of.
“There’s coyotes, snakes, they’ve got cute little rabbits that I have to give them credit for, but mostly there are rats, nice fat little rats that come in our garage,” Brown said, noting that he had killed as many as seven in a two-day period back in December.
The six-acre tract of land behind the Brown’s home is part of an estate owned by out-of-town heirs.
Brown said he’s had trouble getting the owners to mow the lot nearly from the moment he moved in.
He is instructed to call a local Realtor, who gets in touch with the owners, but that process can get bogged down faster than the grass can grow, Brown said.
“For six or seven years we’ve had problems getting these people to cut the grass,” he said.
As bad as it is now, It used to be worse when the entire tract was grown up with a dense layer of trees and shrubbery.
The owners did come in and bulldoze the overgrown vegetation after repeated phone calls and after the city got involved, Brown said.
Now, dense trees and shrubbery still remains on a portion of the lot, but next to Brown’s home there is a barrier of overgrown grass.
“It was clear when we moved here. You could see the house on the other side,” Bernadette Brown said.
Now, she won’t go into the garage without watching her step.
“I look before I go out into the garage, and if something comes toward me, I am going to run,” she said.
Cornell Brown said he called the Realtor about five or six weeks ago and was told the owners would have it mowed, but so far that has not happened.
“I told him to tell them I would send them the rats I catch as proof they need to mow,” he said.
The Brown’s problem with high grass is not anything the city of Port Arthur has not heard of before.
Each year the city spends thousands on mowing other people’s property, Lawrence Baker, Port Arthur director of community services, said.
On average, the city is spending $350,000 to $400,000 a year on vacant and abandoned property.
“It’s a constant thing this time of year,” Baker said.
When efforts to get the landlord to cut the grass have failed, the city will step in and have it mowed as long as the property is heavily overgrown with vegetation, Baker said.
City codes dictate that a property is in violation if the grass is more than 12 inches tall.
First, the city will send a certified letter to the property owner putting them on notice that the grass must be mowed in seven to 10 days. If it is not, Baker said the city steps in.
As part of the process, the city puts a lien on the property when they have to contract a mower.
Baker said the city is bogged down with mowing, but takes the problem seriously.
“It is  a health and safety issue so we try to keep it down. It is also a fire hazard,” Baker said.
E-mail: sherry.koonce@panews.com
Twitter: skooncePANews

Port Arthur City Councilmembers will discuss a full slate of issues important to the city Friday in an all-day retreat... read more