Culinary Thrill Seeking: Mom goes down by the river for birthday 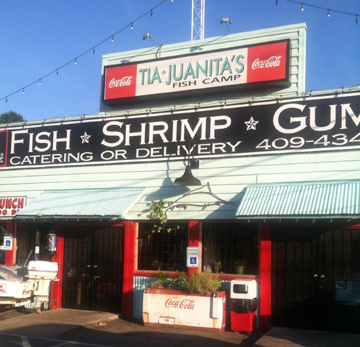 Both my mother and I can be shy about attention on birthdays, but I think her coolness merits attention. She confirmed what she’d like to do just hours before we did it. We picked up Hamburger Depot burgers and onion rings in downtown Beaumont and headed down to Riverftont Park.
The thick patties were so good and we enjoyed pleasure boats such as the “Stewpot” going by.
A man from another bench shouted out “beef or chicken” to “Stewpot’s” captain. Beef ragout or maybe a fish stew if they were lucky, he replied.
Mom reminded us that her mother equated a by-the-river experience to pleasant times. If she was eating something good, she’d say “that on a river bend” to imply such a location could only make it better.
After Saturday night Mass we wanted to treat her to another day of festivities, and again, we were in the parking lot with the engine running before she revealed that a fish taco from Tia Juanita’s in Beaumont would be a fine treat. She has really taken to chatting with the owner there.
She was right, the tacos did hit the spot. I think we hit on two winners to celebrate her birthday. Maybe that’s three, because we started Thursday night with different tacos. Read on:
Tacos La Bamba
History and tacos can become habit. The McFaddin-Ward House offers amazing free programs, often with lovely receptions to follow. But sometimes you want a taco to follow. Tacos La Bamba is right down the street and offers little spicy bites like my onion, cilantro and spicy pork taco, with filling centered on two little corn tortillas. My mom was bragging about her recent breakfast burrito and how spicy she found the habanero sauce. I asked for some and also got another, darker red/brown sauce.
The woman at the counter went to the back when I asked about ingredients and came out with a list that included: cascabel, de harbol, ancho, cebolla, chipotle and ajo. I learned the first pepper is called a rattler, so imagine the seeds rattling in this ball of a pepper. There’s also a snake with that name. The second ingredient is sometimes called a rat’s tail pepper. Still, it was more of a great flavor and not searing hot. I managed to take enough home in that little container to serve it over a cheesy egg for breakfast. Now that’s how to start the morning.
An upcoming McFaddin-Ward program is “Born on the Kitchen Floor in Bois Mallet,” the story of one African-American family in a book by Lovey Marie Guillory. It will begin at 6 p.m., Aug. 6 at the home’s visitor center on Calder Avenue in Beaumont. Call 409-832-1906 for information.
darraghcastillo@icloud.com