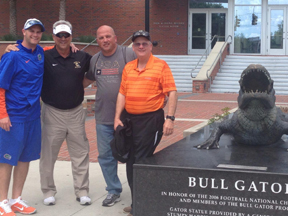 Former Nederland quarterback Kevin Barbay has seen the ups and downs of football.
The downs are obvious in Barbay’s case. It was the two seasons spent at Warren High School as head coach. The Warriors went 0-20 in two seasons.
Then came the ups like being named receivers coach at Lamar University in 2012 and two years later being named director of player personnel at Colorado State.
Now after a 10-2 season with the Rams under coach Jim McElwain, Barbay calls SEC country home as an assistant director of player personnel for the Florida Gators. McElwain’s success led the Gators to name him head coach in late 2014.
“I have really been fortunate and it has been a wild ride,” Barbay said. “It was not long ago I was 25-years-old and really down at Warren. Sometimes I can’t believe I go to work each day in The Swamp. It is amazing and surreal.”
Barbay’s job centers around the ever-changing world of college recruiting. It is a duty based on finding the right high school athletes and then getting inside the player’s world and staying there if he is the right fit for a team’s program.
The job really becomes tough in a conference like the SEC.
“You have to find the right kids and get them early,” Barbay said. “It can be a tricky game and is a never-ending process.”
Lamar and Colorado St. are both respectful programs but nothing right now in college football compares to the SEC.
“It is a daily grind,” Barbay said. “Day 1 you come to realize you are in a different place than you have ever been. The level of player you are looking at is different. Here, you have a shot at everybody. If you don’t stay on a player then Alabama, Auburn, Tennessee, Georgia or LSU will get him. And, that is just naming a few teams. It is really weird to think of that way. You don’t want to get left behind.”
Even being over 760 miles away from home, Barbay has a way to stay in touch with things happening in Southeast Texas.
“Before I get going I read the Port Arthur News,” Barbay said. “Every morning that happens. Southeast Texas is home and I think of this as a hiatus being away. Reading The News is my routine.”
Keeping up with the affairs of the Nederland Bulldogs means Barbay is one of the perfect candidates to give a very early prediction to a certain football game known as Mid County Madness.
“Coach (Brandon) Faircloth is a great friend of mine,” Barbay, who played under Nederland coach Larry Neumann, said. “I have learned a lot about football from him. He knows what my prediction will be this year and what it will always be.”
Barbay is still close to the Nederland coaching staff. He had some very welcomed visitors for the Gators spring game this year.
Neumann, defensive coordinator Delbert Spell and offensive coordinator/quarterbacks coach Monte Barrow traveled to Gainesville to see Barbay at work.