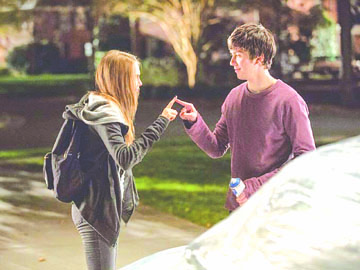 The Movie Guy: Teens should enjoy the visit to ‘Paper Towns’

Following the success of last summer’s “The Fault in Our Stars,” young adult novelist John Green has become one of the hottest writers working in Hollywood today. He has several of his stories in the production pipeline, and the next one up is an intriguing coming-of-age story known as “Paper Towns.”

This is the teen-skewing story of Quentin, also known as Q (Nat Wolf), a smart and semi-nerdy teenager who has long harbored a crush on his next door neighbor, Margo (Cara Delevingne). They run in different social circles, so it comes as quite a surprise one night when Margo climbs through Quentin’s bedroom window, asking him to be her getaway driver on a night of PG-13 rated mischief and vengeance.

It turns into quite an adventure, made even more memorable when Margo goes missing the next morning. It is assumed that she ran away, but nobody quite knows what happened to her. Quentin is determined to unravel the mystery, so he enlists his posse of friends (Austin Abrams, Justice Smith and Halston Sage) and they hit the road, looking for answers.

It’s a very appealing group of characters, certainly interesting enough to keep audiences invested in their modest adventure. Unlike “The Fault in Our Stars,” the characters in this story come across as quite believable, even while spitting out some of Green’s over-dramatic dialogue.

Nat Wolf proves to be a natural leading man, capably straddling the line between geeky adolescence and obsessive proto-hero. Cara Delevingne also makes a profound impression as the mystery girl, Margo, who launches the whole “Paper Towns” adventure. She has the loner teen temptress thing down cold, making it easy to believe that a group of teenage boys would ditch school and head off on such an improbable mystery quest.

You can expect a lot of tunes on this road trip, and “Paper Towns” is so stuffed with contemporary pop rock tunes that the soundtrack may prove to be just as popular as the movie.

That is especially true if you’re in the film’s target demographic. If you are an impressionable teen, preferably female, then this is one of those films that you can claim as your own. We jaded adults won’t be as impressed, although there’s still enough of an intriguing story here to make “Paper Towns” worth a quick visit.

Movie reviews by Sean “The Movie Guy” are published weekly in the “Port Arthur News” and seen weekly of KBOI-2 TV and KBTV, Fox 4. Sean welcomes your comments via email at smcbride@sbgtv.com.