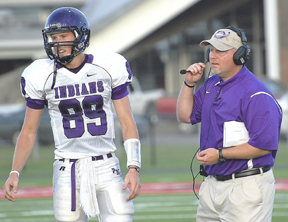 News file photo Former Port Neches-Groves quarterback Brennan Doty in 2010 had one of the best seasons for an Indians signal caller in Brandon Faircloth’s second season as head coach.

Leave it to the Port Neches Indians to pick up the school’s first ever football win against the Nederland Bulldogs back in 1925.
Ask Bulldogs fans though and they will remind the purple and white Nederland beat PN two weeks before 6-0.
The Indians tradition dates back to the mid-1920s as Port Neches High School.
Gordan LeBoeuf remains the Indians career rushing leader. He ran for 4,794 yards between 1953 and 1955. Those same years Bobby LaBorde ran for 3,193 yards to come in third in the record books.
Port Neches-Groves first came about in 1956 and it was Lewis Vernon Ford who was the coach of the initial PN-G squad that went 6-4.
It took until 1961 for the PN-G Indians to reach the postseason with Wilford Moore as coach. The Indians lost in the first round to Galena Park, 13-0.
Legendary coach Bum Phillips coached two seasons at The Reservation and went 5-4-1 in 1963 and 7-2-1 in 1964.
From 1970 to 1972 played perhaps the most famous Indians player of all-time, Jeff “The Jet” Bergeron. Bergeron went on to rush for 3,928 yards.
In 1973 a man named Doug Ethridge took over the program and PN-G soon found itself on the state map for good.
The Indians lost 14-7 in the state semifinals before breaking through in 1975 with a state championship win over Odessa Permian, 20-10.
PN-G lost in the finals in 1977, 13-10 to Plano.
One of the most prideful historical marks for PN-G fans is the fact from 1969 to 1983 the Indians did not lose to their rival Nederland Bulldogs.
The program then had its ups and downs until Danny Malone and the 1989 Indians team went 12-2 and lost in the regional quarterfinals to A&M Consolidated, 31-13.
The 1994 season started something special for PN-G, even if the team went 1-9 that season.
Matt Burnett was named head coach and he stayed on for 15 years and became the all-time winningest coach in team history. Burnett’s record stands at 95-66. His teams won five district championships and reached the 1999 state final.
Burnett and the Indians that year were defeated 28-18 by Stephenville who was coached then by current Baylor University head coach Art Briles.
In 1999, quarterback Dustin Long set the all-time passing yards for a season with 3,087 yards.
Burnett’s final season came in 2008 when current coach Brandon Faircloth took over the program.
Faircloth and the Indians went 11-1 in his first year and the next season went 8-5 with another great quarterback, Brennan Doty. Doty threw for 2,868 yards in 2010, good for second in the PN-G record books until 2014.
Adam Morse took over the signal caller duties as a junior last year and guided the Indians to a 7-4 mark.
Morse threw for 2,977 yards and 31 touchdowns.
Even after losing one of the best receivers in PN-G history in Kaleb Sparks to graduation, the 2015 year could be the season offensive records shatter almost every week for the Indians.
Port Neches and Port Neches-Groves have a combined 559-338-33 record with a playoff record of 43-24-1.
The Indians also hold a 48-36-7 record against the Bulldogs even after losing five straight to Nederland from 2010 to the present.