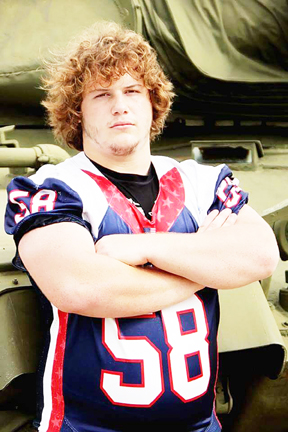 PORT NECHES — Nick Valentine has not let the boundaries of Texas be his stopping point for playing football.
The Port Neches-Groves defensive lineman has for three years been a part of the United States National Developmental team and again hopes to compete in the International Bowl.
Playing in the game and being a part of the team has given Valentine the chance to teach players from other countries the game of American football.
“It is a huge honor,” Valentine said. “I enjoy playing for them. It is a great experience to meet other players from around the country and to play against teams who do not know as much about American football.
“Some of the times there is a language barrier. That is hard. I worked with some D-linemen earlier this year from Japan. That was fun. They could interrupt what I was saying.”
It is difficult to make the national team. It all begins with camps before players are chosen into multiple teams that play against each other. Finally, a player could be chosen to put on a USA jersey to compete in the International Bowl and now this season a new round has taken shape.
The best players who compete in the International Bowl have a shot to represent the country in the world championships.
Valentine is not only playing for himself in the games, he also is representing PN-G.
“We have a good school here and a great team,” Valentine added. “To share my style of play with others is an honor.”
A big aspect of being a part of the national team is Valetine has not taken much time off during the summer. Two-a-day workouts for most area high schools start on Aug. 3. His conditioning is at a high level already after participating with the developmental teams.
“I am getting better,” Valentine said. “The more I improve, the better chance of me playing at a higher level.”

By Chester Moore Jr. The News outdoors columnist Where can I fish from the bank in Southeast Texas? That is... read more