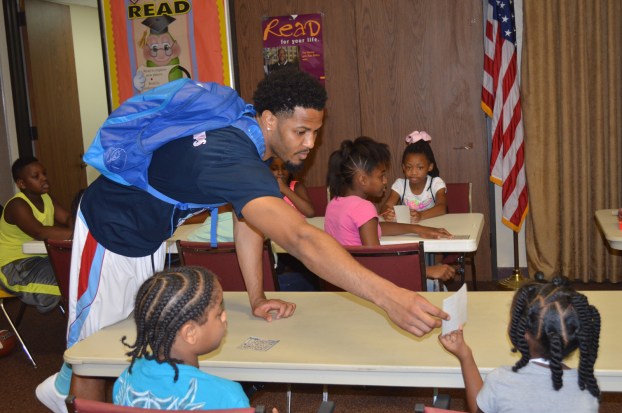 One-by-one Port Arthur children marked off spaces on cardboard cards Wednesday while hoping the lady at the front of the room would call the magic number that would make them the winner in a game of Bingo designed to make learning fun.
Zenoria Brandon, 7, a student at Booker T. Washington Elementary School in Port Arthur was the first to fill her card,  and the first to claim her prize: a Disney Princess book to take home and read.
Brandon was among a room full of children participating in the Port Arthur Library Summer Reading Club Wednesday.
The students represented three Port Arthur school campuses and were enrolled in the Port Arthur Parks and Recreation summer program.
“Today we are having fun while the children are exposed to what they will find at the library,” James Knowles, Parks and Recreation summer coordinator, said.
The students — about 120 of them Children’s Librarian Carolyn Thibodeaux estimated — started their field trip to the library playing on an inflatable moonwalk outside library grounds before going inside for a game of Bingo.
Each game winner received a free book to take home to read.
Dejoshua Sneed, 8, a student at DeQueen Elementary, estimated he has read about 10 books this summer. His favorite, “Batman,” took him to a place of adventure, he said
“You get to learn; it makes learning fun,” he said.
Eight-year-old Jalen Lewis was visiting his grandfather in Port Arthur from his home in Louisiana. While in Port Arthur, he is enrolled in the Summer Parks and Recreation program, and was glad the group came to the library Wednesday.
Lewis likes to read, especially books about football and motorcycles, and believes the more he reads, the more prepared he will be for school this next year.
Jamarqus Jones, 23, was among the volunteers helping with the Parks and Recreation Summer Program.
Jones, a basketball player at Alabama’s Talladega College, back home in Port Arthur for the summer, reprised his role helping children for the third consecutive summer.
Jones, a business management major in his senior year of college, plays shooting guard and small forward for the Talladega Tornadoes.
The kids, he said, look up to him because of his height, always asking him if he in the NBA.
The message he’d like to impart, however, is that of a role model — someone who can teach them how to interact with others, make friends, and stay out of trouble.
But, mostly he just loves being around kids, Jones said.
This year’s summer reading Club has been extended through July 27 because of H-E-B Tournament of Champions grant funding in the amount of $2,000.
The culmination celebration, from 9:30 a.m. until 6:30 p.m. will feature the TAME Trailblazer  —  a traveling science exhibit filled with hands-on activities centered on energy, aerodynamics, space science, weather and biotechnology.
The Trailblazer is suitable for all ages but targets third through eighth  graders. The Trailblazer engages students with interactive projects and experiments related to math and science, creates awareness of careers in Science, Technology, Engineering, and Math (STEM), and provides opportunities to interact with professionals in the community.
For more information please call Port Arthur Public Library or visit paplibary.org
E-mail: sherry.koonce@panews.com
Twitter: skooncePANews

Children aren’t often encouraged to get dirty. It’s not that making a mess isn’t fun — even adults want to... read more