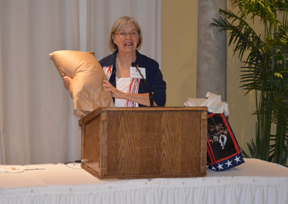 Susan Lana Hafner speaks to members of the Southeast Texas Christian Women's Club Friday about a ministry she started years ago that uses a pillow to provide a secret meeting place with one's creator.

PORT NECHES — If there had a been a category in Susan Hafner’s high school for “most unlikely to succeed,” she’s sure she would have won the distinction hands down.
After all, there is nothing in her upbringing to even hint she would one day start a non-profit that would comfort so many with an item as simple as a pillowcase.
The grassroots, volunteer non-profit One Touch Awakening now reaches out to those in need in more than 36 countries.
Hafner, the guest speaker at the Southeast Texas Christian Women’s Club Friday, has dedicated her life to spreading the message: “One Touch from God is greater than all the world can offer.”
In front of the Christian Women’s Club Friday she recalled a time in her young life when things were chaotic at best.
“I was just a lost little girl,” she said.
Growing up an only child of two acoholic parents, both with mental illnesses, her life was difficult, and caused her to have the social skills of a pre-schooler when she was in high school.
Hafner’s father had fought in World War II, and seen more than his share of casaulties.
His paranoid schezophria kicked in while he was there, she said.
Her mother suffered from obsessive-compulsive disorder, which manifested itself in a myriad of ways, but mostly she convinced that someone was going to poisen her.
To compensate, her mother self-medicated with alcohol, and men.
“Mom was married seven times legally, always worked in a bar, and brought a parade of men home when one of her stepfather’s gone,” she recalled.
She saw her mother engaged in activities with the men that no child should have to witness, Hafner told the Women’s group.
Her mother’s delusions her were so severe that she would not eat at a dining room table for fear that someone would poisen her.
“I dreaded eating lunch at school because I did not understand eating,” she said.
Hafner said she was in three foster homes, and started drinking with her mother at the age of 9.
Still, because she had no one else, Hafner always wanted to stay with her mother, and was unhappy when she was taken from her.
When Hafner was a senior in high school a group of three girls invited her to a church service. Though she had no concept of Christianity, she said she’d go in hopes that she would make friends and have someone to sit with at lunch.
Hafner’s plans to go to church were nearly derailed when her mother brought her along on a road trip to meet a man in a motel.
But, her will to make a friend got her to the Sunday night service, where she followed one of the girl’s to the front of the church during the invitation.
“The minister said theree words to me: “God Loves You,” and instantaneously my life was changed,” she said of that long ago night in church.
Hafner’s father, though a highly decorated Captain in the War, ended up a transient, leaving Hafner with an appreciation for veterans and the sacrifices they make.
Her mother came to find Jesus too, after many years of her daughter witnessing to her, Hafner said.
The idea to distribute pillow cases with the inscription “One touch form God is greater than all the world can offer,” on the tag has resonated around the world.
The company has a three-fold purpose, not only to provide a resting place for those needing comfort,  but also to offer a prayer network for all who sleep on the cases and to remind nightly of God’s greatness, she said.
Today, Hafner does a lot of public speaking, and her company has reached many. She travels nationwide speaking to military organizations, school, churches of all faiths, conferences and community groups.
To date, more than 6,000 pillows that cradle the body and comfort the soul have been sent ot War Zones where troops are deployed wihout a pillow.
One Touch pillows are also supplied to family members so they can connect with loved one in Afghanistan each night. The company has also provided pillows to wounded troops and veterans and the homeless.
Hafner is also author of two books, “One Touch: “The Story of an Awakened Heart” and “One Touch Awakening.”