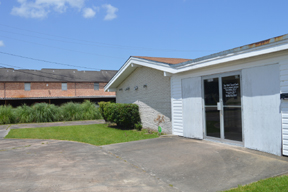 New World Harvest Church is at he center of a controversary in Nederland stemming from neighbors alleging the congregants' singing exceeds acceptable noise levels.

NEDERLAND — A church congregation that says they are just making a joyful noise to the Lord, has got their neighbors singing the blues.
So much so that Nederland couple Rodney and Mary Richard has filed upwards to 40 noise complaints against congregants of the two churches holding services in a small white building in the 3500 block of Helena Avenue.
Until about two months ago the New World Harvest Church shared the building with the congregation from Igneisa Nuevo Amanecer,  which has since moved to another location after its membership dropped significantly.
Before moving, the two congregations shared more than just a building.
As part of worship services, the two churches featured bilingual contemporary gospel music programs that neighbors Rodney and Mary Richard have complained was so loud it disturbed their peace.
Nederland Police records indicate the Richards in about a year’s time filed numerous complaints for excessive noise on members of both congregations, including 16 against New Harvest Pastor Keith Richard.
Bush said of the 15 townhouse-style homes in the complex, no other residents have lodged complaints, or come forward as witnesses for the Richards.
New Harvest’s pastor said the singing, though often spirited, is not loud enough to exceed the city’s noise ordinance.
Each time the Richards filed a complaint, police responded to the church to investigate and to measure the noise level, Nederland Police Chief Darrell Bush said.
“We try to respect the church and their worship service, will enter and stay at the back of the church,” Bush said.
Most of the complaints were lodged on week nights, between the hours of 7 p.m. to 9 p.m., when the churches were either holding worship services, or having choir practice.
The church building is located in a neighborhood retail zone, about 120 feet from the Richard’s back door of a small community of townhouses.
The city’s current noise ordinance for that zoning designation prohibits noise levels from exceeding 70 decibels.
Nederland City Manager Chris Duque said there was some confusion about the level of noise permissible because the city’s Web site showed an out-of-date zoning map, with the church in an area where noise levels were not to exceed 50 decibels instead of the updated 70 decibels.
Richard believes his congregation is at or within the 70 decibel range, and that if anyone is disturbed, its members of the church congregation.
“I have spoken to the police chief, the assistant police chief, the city manager, and have got no results,” Richard said.
He hopes to find some relief from an upcoming hearing to decide whether the church is guilty of exceeding the city’s noise ordinance.
To try and get along, Richard said the church has cut its services back to Wednesday and Sunday nights, and that the other church no longer meets there.
When The News spoke to the Richard’s, they declined to comment for this article.
A pre-trial hearing is set for Aug. 4.
If the church is found guilty of exceeding the city’s noise levels, a Class C Misdemeanor, members cited in the complaints could be fined up to $500.
Richard said he hopes the complaints will stop, and plans to protest at City Hall if they don’t.
“If the police continue to come out, we are going to protest in Nederland. We are going downtown to rally at the police department and city hall,” Richard said. “If I cannot get justice and worship freely, I will go downtown and protest.”
Keith Richard has recently filed a case in district court to contest the May 9 Port Arthur City Council race that he lost against Willie “Bae” Lewis by five  votes.
E-mail: sherry.koonce@panews.com
Twitter: skooncePANews