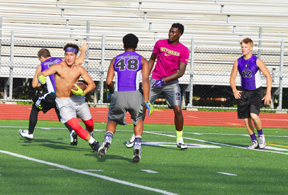 By Gabriel Pruett
The News Sports Writer
PORT NECHES — Forget going to College Station only for a good time, the Port Neches-Groves Indians want to win.
The Indians 7-on-7 team competes in the state tournament starting at 2 p.m. Friday against Plainview. PN-G then faces Pearland at 4 p.m. and Lake Dallas at 6 p.m. The Indians hope to win the pool and compete for the state title on Saturday.
PN-G went winless at last year’s 7-on-7 state tournament.
Quarterback Adam Morse said this year can be much different for the Indians.
“The summmer has gone very good,” Morse said. “We have got a lot of work in and we have improved.”
One major component to the PN-G offense, the unit with the biggest spotlight on it heading to College State, is the improvement of Keynel McZeal and the comeback of Jack Giblin.
McZeal caught 32 balls last season as a sophomore for 402 yards and five of Morse’s school record 31 touchdowns.
What McZeal accomplished is only half of what he remembers from 2014. He is ready to stop the stigma of him dropping passes from his accurate quarterback.
“Last year I was a little bit nervous,” McZeal said. “I dropped some passes I should have caught. This year, after one year on varsity, there are less nerves.”
This tournament is not all offense, just ask PN-G standout linebacker Trey Rembert who finished with over 130 tackles in 2014.
“We take our defense very seriously,” Rembert said. “We do the best we can because 7-on-7 is so offense-heavy. I trust all the players next to me on defense. Experience is key and we are all learning.
“We just want to do the best we can this weekend. This experience is great for us heading into the season.”
McZeal is excited to participate in the tournament with his teammates for the first time.
“I was injured last year so this will be my first time to the state tournament,” McZeal said. “This summer has been fun. Our offense is great to be a part of because when the ball doesn’t come your way you know you have guys like Jack and Caisen (Sullivan) who are going to catch everything and Adam is a great quarterback. We are going to College Station to win it all.”