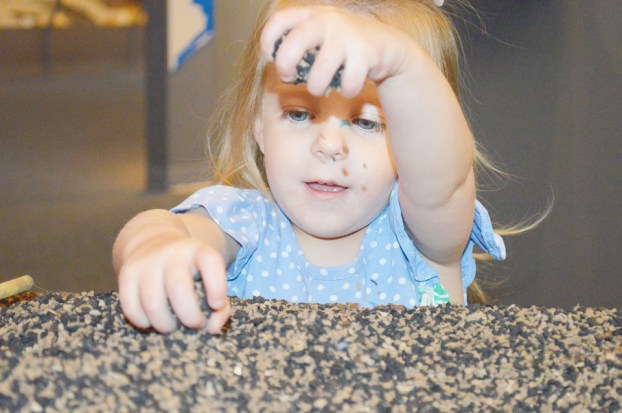 Maddie Weeren, 2, of Nederland explores a hands-on exhibit during the "Super Sleuths" children's program at the Museum of the Gulf Coast in Port Arthur Tuesday.

The Museum of the Gulf Coast was crawling with tiny detectives Tuesday morning as children snooped around the exhibits looking — and, at times, literally digging — for clues to solve the “mysteries of the museum.”

The museum’s annual “Explore It!” summer program kicked off in high gear Tuesday as children donned their “Super Sleuths” identities for the first round of the weekly series.

Stephanie Harren, Museum of the Gulf Coast education coordinator, said this summer’s “Super Sleuths” will be able to roam the museum solving cases tailored to fit a different theme each Tuesday in July.

Harren said Tuesday’s “Super Sleuths” created their own detective bags at the beginning of the session and went from station to station solving puzzles and completing educational crafts geared toward the first theme, “Museum Mysteries.” 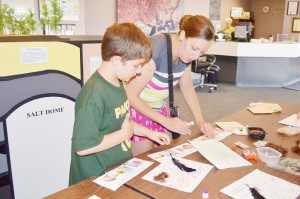 “We’ve laid out several mysteries for them to solve today using their detective bags,” Harren said. “When they first walked in, we gave them a museum mystery sheet that has one half of a picture.

“It’s up to them and their parents to walk around the museum and find the gallery or the exhibit that matches and finishes the picture. When they find it, there’s an activity for them to do that also directs them to the next activity.”

Harren said the first session was designed to show the children “an overview” of the museum, with activities staged in most of the galleries. The remaining three sessions will be geared toward specific galleries to complement each theme, she said.

Nederland native Jennifer Weeren brought three “Super Sleuths” to the first session Tuesday morning, which made her supervisor for the ongoing investigations of her nephew Connor Blackwell, 8, and her children Max, 5, and Maddie, 2.

“We’ve been here before for summer programs, field trips, just to visit. They have a blast at the museum,” Weeren said. “We’re going to miss one session this month while we’re on vacation, but we’ll be here for the other two.” 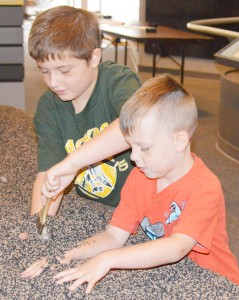 Cousins Connor Blackwell, 8, left, and Max Weeren, 5, of Nederland explore a hands-on exhibit during the “Super Sleuths” children’s program at the Museum of the Gulf Coast in Port Arthur Tuesday.

Harren said each session has 35 spots available for children ages 3 to 10. Registration is $1 per child, per session.

The Museum of the Gulf Coast is located at 700 Procter St. in Port Arthur.