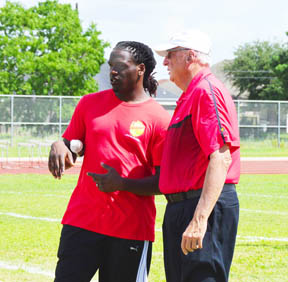 After getting multiple exposures throughout Texas and in Kansas City on the Time-Warner Sports Channel, the Port Arthur News Homecoming Roast of Jamaal Charles goes national Wednesday night and Thursday morning on the Longhorn Network.
LHN plans to air a 30-minute snippet of the roast from a University of Texas angle at 10 p.m., midnight and 7 a.m. Thursday. Since LHN sent its own crew to Port Arthur for the June 13 event, its version will be different from what Time-Warner aired.
The roast had considerable UT flavor, with videos from former Longhorn coach Mack Brown, current coach Charlie Strong, AD Steve Patterson and former great Earl Campbell, in addition to former QB Vince Young being one of the roasters. There were also videos from CBS’ Jim Nantz, Jimmy Johnson of Fox Sports and actor Rob Riggle.
Chiefs head coach Andy Reid, Denver defensive coordinator Wade Phillips, former Port Arthur and Oklahoma great Joe Washington and Chiefs play-by-play announcer Mitch Holthus also roasted Charles.
Among the memorable lines of the night were Charles’ responses to the various roasters. He playfully remarked to Phillips that if the Cowboys had drafted him when Wade was coaching there he might still be in Dallas.

By Bob West The News Golf Columnist Karlei Hemler’s summer just keeps getting better. Shortly after returning from her most... read more