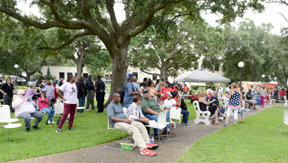 Looking around the lush tree-lined grounds surrounding a newly-restored water feature at the Jefferson County Sub-courthouse in downtown Port Arthur Wednesday, Pat Holmes said she was proud of how the place turned out, and the crowd that had gathered to enjoy a park named in memory of her late husband.
Port Arthur’s “Popeye” Holmes Park was bustling with activity around the noon hour with good food, good music and good fellowship — all designed to attract people to the city’s downtown while offering a venue to get to know city officials in a relaxed setting.
“I think it is wonderful; I just feel him here. I know he is with us,” Holmes said of her husband, a longtime Southeast Texas lawman known who died in September 2013 at the age of 81.
Holmes, who also sits on the Port Arthur Economic Development Corporation board, said the latest addition to the park, the refurbished reflecting pool, is just the latest attraction in downtown Port Arthur.
And, if Wednesday’s crowd was any indication, word is getting out that there is a lot to do downtown.
From the Port Arthur Rotary Club’s new Avenue of Flags, to the boardwalk, Museum of the Gulf Coast, new EDC building, and upgraded pavilion, there is enough to wile away several hours.
But, on Wednesday it was all about the park.
J.A.G. a local blues band, and Port Arthur native Zoe Jackson, aka Zoe- Fashion Plate, provided musical entertainment, while local vendors offered lunchtime fare.
Hilton Kelley, an environmental activist from Port Arthur, attended Lunch in the Park for the first time Wednesday, and he wasn’t disappointed.
“It’s great for the community. To bring everybody here together, to let our citizens have the opportunity to meet their city leaders in a relaxed setting, it’s just a good event,” Kelley said.
And, to make it even better, Kelley said the community luncheon was on the day the city had established as Hilton Kelley Day in honor of his efforts to help improve the city’s air quality.
“I told myself I am not working today, so here I am — having a good time,” Kelley said.
Organized by Precinct 3 Michael “Shane” Sinegal’s office two to three times a year, the Lunch in the Park event this time showcased the new reflecting pool that has been upgraded to include a natural filtering system, vegetation and fish.
“It’s beautiful; this is what I envisioned,” Sinegal said. “To see those kids over there playing on the bridge, it just delights me.”
Sinegal was also delighted with the generosity of the Buu Mon Temple for their donation of plants and fish.
Temple members came to the aid of the county when the project Sinegal commissioned did not turn out as he envisioned. With sparse vegetation, few fish and inferior water sprinklers, Sinegal went back to the drawing board to get it completed the way he thought it should be.
In January he had announced plans to renovate the water feature for a cost of $75,000.
The restoration project was originally funded jointly by Port Arthur’s Economic Development Corporation and the county. The EDC contributed the bulk of the expenditure with about $60,000 dedicated from funding earmarked for parks projects. Jefferson County paid for the cost of the architectural firm, Beaumont’s LaBiche Architectural Group.
Sinegal said another $2,500 was spent, along with the plant and fish donations from the Temple, to create a fixture that all would enjoy.
Since then, Temple members have volunteered to take care of the vegetation.
“We tried to create a landmark for the city to attract more visitors to the downtown,” temple member Johnny Truong, 50, said.
Representatives from city and county law enforcement as well as firefighters were in attendance, including Christopher Bates, Jefferson County Precinct 2 Constable.
Bates, who delivered the eulogy, said his prayer for Port Arthur is that the community continues to find ways to come together.
“We are a diverse community, but should come together as one,” Bates said.
Captain Craig Turner, with the Jefferson County Sheriff’s Department, said the event provided an opportunity for law enforcement and emergency responders to mix with the people in a casual setting that they normally serve.
“This is a great opportunity for all people of Port Arthur to come together, and a good opportunity to let people see us in a different light, to get them to know us,” Turner said.
Sinegal said the next Lunch in the Park will be in the fall, either September or October, and will feature the same format: food, fellowship and music.
E-mail: sherry.koonce@panews.com
Twitter: skoonce@panews.com

Business owners and bystanders acted quickly when a Port Arthur man drove his burning car into the parking lot in... read more