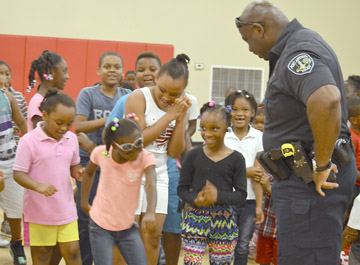 A group of children in Port Arthur learned about the dangers of bullying and how not to be a victim during the city of Port Arthur Health Departments third annual Bullying Stops Here Rally on Wednesday.
More than 270 children as well as parents and school chaperones packed the Amos Evans Gymnasium at the Port Arthur Recreation Center where kids danced, sang and even stopped, dropped and rolled while learning safety tips.
Port Arthur Police Officer Rickey Antoine began by pointing to the gun on his belt asking the children “what is this?” A gun was the response.
“Don’t touch it, don’t touch it don’t touch it,” Antoine said. “Your mama has one, don’t touch it. Your daddy has one, don’t touch it. Your grandpa has one, don’t touch it.”
Antoine brought adults Jazmine Whitaker with Lee School, Brandon Jackson with Lucian Adams school, Jose Ceja, a professional mixed martial artist and boxer with Team Ceja to the front to demonstrate what to do when confronted by an officer.
“The number one thing police officers want you to do is what we tell you to do,” Antoine said, adding that when they respond to a disturbance they do not know the whole situation which can be dangerous. The best thing is to do what the officer tells you to do, he added.
With that he had one man sit on the ground, another kneel then asked Whitaker to “do the stanky leg.”
Later, per instruction, Whitaker did not obey the command and Antoine showed what would happen in that situation.
Antoine made his way through the throng of kids dancing as they danced along with him.
Ceja then brought his teammates up for demonstrations on what to do when confronted by a bully.
“When approached by a bully you do not want to fight,” Ceja said. If you put your fists up you are a threat. The best thing is to put your hand out and say you are not going to fight, let’s talk. You don’t want to punch then. You don’t want to hit them.”
Ceja offered demonstrations of how to escape an attacker while explaining non-violent ways to defend yourself.
“You don’t want to raise a fist to a bully. You don’t want to engage in a fight,” he said.
Port Arthur Firefighter Jerald Aiken told the importance of having a meeting place in case of a fire as well as what to do if your clothes are on fire — stop, drop and roll. He was joined by the department’s remote controlled “Pluggy” the fire hydrant. The red fire hydrant rolled through the gym and periodically sprayed the children with a stream of water.
Dylan Andrews, 4, enjoyed one of the earlier events where Port Arthur Independent School District Superintendent went through the alphabet.
Jernye McZeal, 9, jumped and danced along with the other students and at the end of the event told of what she learned.
“I learned how to be safe and to do what the cops tell you to do,”  McZeal said.
Students from eight elementary school summer recreation programs attended the event, Thad Sanders with the City of Port Arthur said.