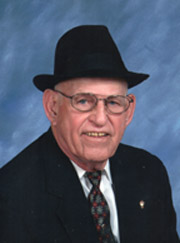 Raymond “Pemay” Frederick, Sr., 87, of Nederland, died Saturday, June 27, 2015. A native and lifelong resident of the area, he was born on November 30, 1927, in Port Neches, to Lovenia Duhon and Wilford L. Frederick.
Raymond was a Merchant Seaman before retiring from Quantum Chemical after thirty years as a pipefitter and welder. He was a member of Nederland’s Knights of Columbus Council #5145 and St. Mary’s Knights of Columbus Council #6763 in Fannett.
Survivors include his wife, Evelyn Yoes Frederick of Nederland; sons, Raymond J. Frederick, Jr. and his wife, Shelia and Donald W. Frederick and his wife, Judy, all of Fannett and Christopher A. Frederick, Sr. and his wife, Becky, of Normangee; grandchildren, Troy Frederick, Amberlee Buffington, Rebekah Frederick, Tamarah Neely, Chris Frederick, Jr., and Amie Coble; and numerous great-grandchildren and great-great-grandchildren.
He was preceded in death by his parents; first wife, Helen Frederick; three brothers; and two sisters.
A gathering of Mr. Frederick’s family and friends will be from 5:00 p.m. until 8:00 p.m., with a Rosary recited at 6:00 p.m., Tuesday, June 30, 2015, at Broussard’s, 505 North 12th Street, Nederland. A Mass of Christian Burial will be celebrated at 10:00 a.m., Wednesday, July 1, 2015, at St. Charles Borromeo Catholic Church, 211 Hardy Avenue, Nederland. His interment will follow at Oak Bluff Memorial Park, Port Neches.
Memorial contributions may be made in Mr. Frederick’s memory to Nederland’s Knights of Columbus Council #5145.
Complete and updated information may be found at: broussards1889.com.