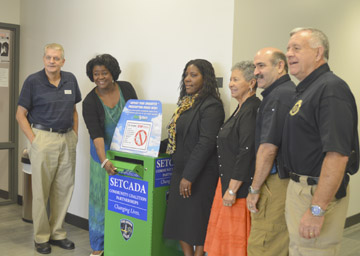 Citizens now have a permanent place to drop off unwanted prescription drugs — the Port Arthur Police Department.
The South East Texas Council on Alcohol and Drug Abuse, in partnership with PAPD, placed a mailbox-like container in the lobby of the police station that will keep prescription medicine away from children and out of the water supply on Monday.
Port Arthur Police Sgt. Ken Carona officially unlocked the door to the box as Mayor Deloris “Bobbie” Prince, PAPD Maj. John Owens, SETCADA Coalition Coordinator Joseph Broussard, SETCADA Executive Director John Neely, coalition board member and treatment counselor Ales Flood and Director Harriet Michell looked on.
“The DEA (Drug Enforcement Administration) used to sponsor an annual event where they took back prescription medications but they stopped that,” Broussard said. “SETCADA has partnered with the Port Arthur Police in bringing to our citizens a prescription drop box for unwanted medications.”
The concept is to keep dangerous drugs out of the hands of children and out of the water system. The box is a first of its kind in the area; the nearest one being more than 100 miles away north of Houston.
“We are really proud to have Port Arthur Police Department bring this to reality for the citizens of Port Arthur,” he said.
Carona said there are dangers with drugs being flushed away and getting into the water system as well as tossing drugs into the garbage.
“We have received calls asking what to do with medications,” Carona said.
SETCADA purchased the box and PAPD will keep a watchful eye on it. There is on site monitoring and a locks for safety. Periodically the drugs will be destroyed in the safest manner possible, Carona added.
Carona explained the box is for the above mentioned drugs and not for illicit/illegal drugs. Should a person find drugs they should contact the police department.
The green box features labels on what is accepted such as prescriptions, prescription patches and medications, prescription ointments, over-the-counter medications, vitamins, samples and medications for pets. Items not accepted include inhalers, thermometers, needles/sharps, hydrogen peroxide, aerosol cans, medication from businesses of clinics, ointments, lotions or liquids.
The PAPD is located at 645 Fourth St.
E-mail: mary.meaux@panews.com
Twitter: MaryMeauxPANews