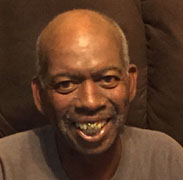 James Joseph Ray, Jr., stepped into eternity on Thursday, June 18, 2015. A native of Port Arthur, Texas, James was born January 15, 1951, to the union of Juanita Moses Ray and James Joseph Ray, Sr. James attended Lincoln High School in Port Arthur, TX where he graduated in 1969.
After graduation James joined the United States Army where he was assigned to the Military Police and was a decorated soldier who received The National Defense Service Medal, Armed Forces Expeditionary Medal, and Expert Rifle Badge. He served in Korea and was honorably discharged in 1972.
He was a former employee of the City of Port Arthur where he worked in the Water Division.
James was affectionately known to his family and friends as “Schlitz”, an endearment that followed him his adult life. James was a genuine person whose smile greeted those he met. Anyone who came to know James knew him to be helpful where needed and kind to others. He will be missed by many.
James was preceded in death by his father, James Joseph Ray, Sr. He leaves to rejoice his life, his mother Juanita Moses Ray; sister Barbara Polk (Robert); brothers Kennard Ray (Wanda) of Tacoma, Washington; Leonard “L.D.” Ray and Steven Ray (Denise); three children, Carrie Lynette Ray, Damon Gilliam (LaQuinta), and James Joseph Galentine; five grandchildren; eleven nieces and nephews; 17 great nieces and nephews; special devoted friend Novella Foster, and a host of relatives and friends. He will be forever remembered by the West Side Community, especially those who live on Dunbar Avenue.
Funeral services will be at 2 p.m., Saturday, June 27, 2015, at First Sixth Street Baptist Church in Port Arthur, TX with Rev. Thurman Bartie, officiant, and under the direction of Gabriel Funeral Home. Visitation for family and friends will be held from 12 p.m.-2 p.m. until the time of service. Interment will follow at the United States National Military Cemetery in Houston, TX.