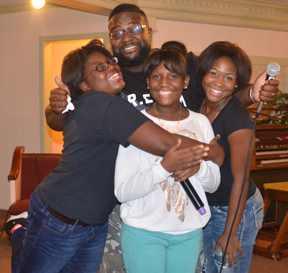 Zechery Queen's daughters, from left, Kamerian, 13; Kamille, 12; and Kennedy, 15; take a break from choir practice to embrace their father.

Queen is a king in eyes of his daughters

Zechery Queen is funny.  He likes to sing “old school” songs, is strict but has a great big heart, he’s the designated bug killer at his home, and he cooks a delicious plate of buttery waffles, but most of all what his three daughters will say about their father is he’s there — always a presence in their lives, playing a supporting role while teaching them they can do whatever they want.
For Zechery Queen, 38, an employee in the city of Port Arthur’s Water Department, his three girls are his world.
“I just hope they will be successful in everything they do. I just hope every dream they have comes true and they continue to put God first in their lives,” Queen said.
This Sunday Queen’s three girls, Kennedy, 15, Kamerin, 13 and Kamille, 12, along with their mother Kendra, 39, are planning a surprise on Father’s Day in honor of the man they respect as much as they love.
The family lives in Orange, where the girls attend West Orange-Stark Consolidated School District, and they go to church in Port Arthur.
But, where you’ll find the hands-on Dad most is at his daughter’s events, cheering from the sidelines, and letting each one know how much he cares.
“Dad goes to pretty much everything, and it makes me feel good to know I’ve got somebody there watching,” Kennedy Queen said. “Looking at most of my friends, they don’t have a father figure in their lives. They grow up with their mother.  We have our father too, teaching us right from wrong, and supporting us in whatever we do.”
As the oldest, Kennedy is involved in the most activities: volleyball, track and field, junior varsity cheerleader, UIL, church, and even modeling.
Kamerin and Kamille’s activities are much the same — enough to keep their father in the road going to and from each of his daughter’s events.
“He’s my hero, my friend and he’s always there for me and is an amazing Dad, and he’s intelligent,” Kamerin said of her father.
Admittedly, Kamille said she was a mama’s girl, but that doesn’t stop her from heaping praise on her father.
“He’s a protector. If I have a nightmare, he’s there to make it better,” Kamille said, adding that they seem to have a problem with spiders at their home.
That’s where Dad comes in.
“We say, ‘go get it Daddy,” and he does. Most of my friends Daddies are divorced from their mothers, so it makes me proud to see Daddy there,” Kamille said.
Watching the time and interest he puts toward their girls is something Kendra Queen admires about her husband.
“It makes me proud and I am honored to be his wife,” she said.
The couple has been married 15 years, and they don’t always agree. But when they have issues, they pray together, Kendra Queen said.
While his efforts do not go unnoticed, Zechery Queen said that’s not the reason he is so involved in his girl’s lives.
He credits his own father, Paul Queen, 67, for teaching him what it means to be a father.
“Growing up I had an example in my Dad. He was there to guide us, provide for us and protect us,” Zechery Queen said.
Though Paul Queen is now pastor of the family’s church, Groves Christian Church on 25th Street, his son remembers a time when his father made local history as the first African American inspector at Port Arthur’s Texaco refinery.
“He led by example — taught us to always be there your wife, your children. He would say, ‘You made that child, so you don’t leave it to someone else. I love my girls, they are part of me and I don’t see it any other way,” Zechery Queen said.
E-mail: sherry.koonce@panews.com
Twitter: skooncePANews

Oft told stories passed down through generations were remembered Friday in downtown Port Arthur, where a parade and celebration in... read more