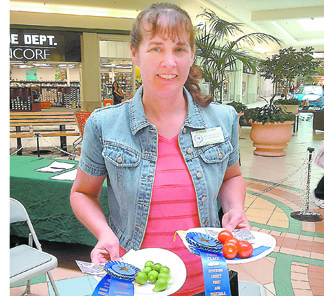 Gardeners and their questions have been literally bombarding the A&M Agrilife Extension office for months, but nothing can compare to the hundreds of questions and comments received Saturday, June 13th, at Central Mall in Port Arthur at the 43rd Annual Jefferson County Fruit, Herb and Vegetable Show.

This show, sponsored jointly by Central Mall Merchants’ Association, Jefferson County Horticulture Committee, area nurserymen, Jefferson County Master Gardener’s Association and the Jefferson County office of Texas A&M AgriLife Extension Service, attracted top-notch gardeners from all over the Golden Triangle to compete for ribbons, prizes and money. The eight categories that attracted the “cream-of-the-crop” in homegrown produce were vegetables, fruits, herbs and processed vegetables and fruits, and the largest tomato.

A total of 78 entries were judged for quality and uniformity. Ten judges were selected to hammer through the picture-perfect entries to search for any speck that might be considered a reason for a lower score. The best vegetable, best fruit and best processed product were selected to win a gorgeous triple streamer rosette and a $25 gift certificate from the Jefferson County Horticulture Committee. The best herb, tomato, youth entry, and Best of Show winners also received a $25 gift certificate, as well as the largest tomato.

The winners in each of the categories are as follows:

The ever popular biggest tomato contest was won by Jay Jaetzold of Port Arthur with his tomato weighing in at 1 pound, 2 ounces.

Emilee Bean, County Extension Agent, Agriculture and Natural Resources, said many thanks to all the sponsors who made this show possible again this year, thanks to the Jefferson County Horticulture Committee members and the Jefferson County Master Gardeners for working the show and to the judges who laboriously selected winners.