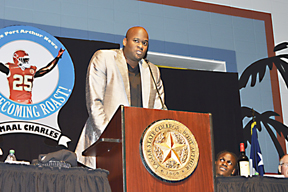 By Vahe Gregorian
The Kansas City Star
On Saturday, city officials proclaimed June 13, 2015, as Jamaal Charles Day in Port Arthur, the town he proudly calls home.
The festivities were accompanied by the unveiling of a bronze bust of Charles sculpted by Douglas Clark, whose previous work includes a tribute to another native and original, Janis Joplin.
Like the bust of Joplin, the chiseled likeness of Charles will be on permanent display in the Museum of the Gulf Coast.
But all this adulation of Charles came with what might have seemed a toll for the Chiefs’ star running back, who was awkward and self-conscious as an adolescent contending with a learning disability and remains publicly bashful despite his stature as the franchise’s career rushing leader.
No sooner had Charles, 28, been celebrated with the bust — that he immediately rubbed on the head — than he became the focal point of The Port Arthur News Homecoming Roast, over which he had agonized the previous few days as he tried to prepare potential come-back zingers for roasters.
Port Arthur might be relatively small, with a population of just over 50,000, but this affair is a formidable production that has drawn master heckler Don Rickles (1991) and then-presidential candidate Bill Clinton to roast Gov. Ann Richards in 1992.
Charles, though, emerged victorious, as he spoke with the eloquence of the heart that both characterizes his speech and makes him a remarkable football player.
He also flashed the sense of humor for which his family knows him but at times is difficult for him to display under the glare of cameras.
After absorbing the blows, Charles took the microphone last and had something for about all his roasters when he reached for notes in the pocket of a short, glitzy coat that coach Andy Reid had accurately suggested looked like something once owned by Michael Jackson.
He turned to the husky Reid, for instance, and said, “When we win the Super Bowl this year, who’s going to put you on their shoulders and carry you?” (In the audience, tight end Travis Kelce piped up, “I’ve got you, Coach.”)
Denver Broncos’ offensive coordinator Wade Phillips was alongside Reid, and Charles suggested to Phillips he might still be with the Dallas Cowboys if they hadn’t passed over Charles in the 2008 NFL Draft.
Charles, whose getup also was distinguished by the image of a cat on the front of his shirt, couldn’t help but grit his teeth and grin as he said that to Phillips, also a native of the area.
But Phillips had dished some himself, albeit more notably at the Chiefs than at Charles in particular.
As he spoke of the team’s similar championship histories, he said that the only difference is that the Chiefs’ team championship photos are all in black and white.
The night really was more toast than roast to Charles, and maybe nobody summed it up better than Reid.
“The next time we get together as a group like this,” he said, “it will probably be at a dinner in Canton, Ohio. I love this guy.”
Not that there wasn’t some fertile material to tease Charles about.
Most of that focus was on his exotic injury history, and as told by Holthus, that meant Charles colliding with a Detroit Lions mascot in a slapstick moment he figured would have fit a “Seinfeld” episode.
Holthus also pointed out the quirky blisters on the feet that once sidelined Charles, and several of the speakers referred to Charles’ rolling his ankle moving out of training camp.
Legendary Texas running back Earl Campbell was unable to appear in person but jabbed Charles via video and asked him why he never mentions his name as someone who helped him “behind the scenes” with some fumble-itis.
Then he accused Charles of big-timing him since he also apparently had failed to follow up on sending him a pair of shoes.
“All I ask for is a simple pair of sneakers, and you lied to me for two years,” Campbell said. “Just send those sneakers when you’re ready.”
Former Texas teammate Vince Young reminisced about Charles’ first collegiate game … when Charles stumbled running out on the field and supposedly told Young, “Are they going to be hitting too hard?”
“All you’ve got to do is just run, dude,” said Young, later shaking his head and adding, “What he always did was go the wrong way on plays, but at the same time he finished in the end zone.”
“Looks like (Reid) has got his whole team here,” Phillips observed. “Now, I don’t know (the rules about) having extra practices somewhere else. (But) I’m not saying he’s trying to bend the rules or anything like that.”
To reach Vahe Gregorian, call 816-234-4868 or send email to vgregorian@kcstar.com. Follow him on Twitter at @vgregorian. For previous columns, go to KansasCity.com

Hats off to West’s dedication towards Charles Roast