Man, dog die after being trapped in car 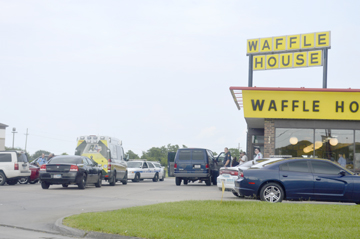 Emergency vehicles fill a portion of the parking lot at Waffle House, 2940 Jimmy Johnson Blvd., after a man and his dog were discovered dead in the manÕs vehicle Monday afternoon. Police believe he was unable to open his car door.

A senior citizen and his dog who were found dead in the man’s 2007 Corvette were likely trapped inside the vehicle.
The man, whose name was not released as of 6:30 p.m. Monday, was a regular customer at the Waffle House, 2940 Jimmy Johnson Blvd., according to police. The cause of his death are under investigation but police believe the man had went to his car to check on his dog and could not get out of the vehicle.
The man had left his cell phone charging inside the restaurant leading police to believe he was expecting to return shortly.
“It initially appears he couldn’t get out of the vehicle,” PAPD Maj. Raymond Clark said.
Police do not suspect foul play or suicide.
Police, fire and ambulance were at the scene Monday afternoon and at some point police were able to open the hood of the vehicle. The car had electric windows and doors.
Justice of the Peace Marc Derouen pronounced the man dead and ordered an autopsy.
E-mail: mary.meaux@panews.com
Twitter: MaryMeauxPANews