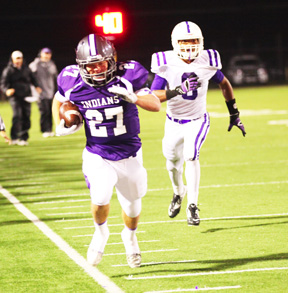 News file photo Port Neches-Groves senior Brant Halfin gets the chance to represent the Indians one last time Saturday as part of the Christus All-Star Classic held at 7 p.m. Saturday at Lamar University.

All-Star events give seniors another game

For one last game, high school seniors get the chance to don their respective colors this week in part of the Christus All-Star Classic.
This is the sixth year for the showcase and the first Christus Sports Medicine has their name as the title sponsor.
Coach Mark Foreman and the Southeast Texas Coaches Association have put together a combination of games to highlight seniors to prospective colleges. The game also has the unique opportunity to put rivals against each other and teammates the chance to play on the same time one more night.
One of the biggest rivalries in the state of Texas is Port Neches-Groves and Nederland and Mid County Madness is at its peak during the football season.
PN-G senior tailback Brant Halfin is part of the All-Star football game set for 7 p.m. Saturday at Lamar University. Halfin on Saturday gets the rarest of rare chances to call Dilon Talbert and Connor Hughes of Nederland teammates.
“That is going to be pretty awkward,” Halfin said. “We are going to be on the same team so all we will want is to get the job done. If were all pretty good against each other so hopefully when we combine, it could be even better.”
Halfin did not get signed to play college football even though he ranks sixth on the career rushing list in PN-G history with 2,663 yards as an Indians player.
“This could be that chance to be seen,” Halfin said. “It might be a little late in the game but you never know if a scout is watching in the stands.”
Halfin is not the only Indians player to play in the football game this Saturday. He will be joined by Ky Walker, Michael Hughes and Keaston Benoit.
Football is not the only sport getting its chance to shine. The week starts at 6 p.m. Thursday with a softball game at Port Arthur Memorial High School.
Friday is a busy day at East Chambers High School. Volleyball starts the evening at 5 p.m. and is followed by girls basketball and then by boys basketball.
“It is fun knowing I have one more game,” Halfin said. “I want to go out there and make a good memory.”