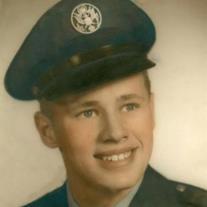 Richard Earl Hollis, Sr., 79, of Port Neches, Texas passed away on Saturday, April 18, 2015 at his residence. He was born on July 30, 1935 in Providence, Rhode Island to the late Howard B. Hollis, Sr. and Natalie Parker. Richard was a retired United States Air Force Korean Veteran and a Jet Mechanic. He also built submarines and was a Professional Truck Driver for most of his lifetime.
Richard is survived by his wife, Sandra Richards; daughters, Reneé Sikes and husband, Daniel of Woodville, Christine Gordon and husband, Joey of Tallahassee, Florida; brother, George Hollis of Wareham, Massachusetts; grandchildren, Robert, Althea, Ashley, Joshua, and Heaven; great-grandchildren Lochlan, Vivian, and Jonathan; he is also survived by many nieces, nephews, and close friends. He is preceded in death by his parents, 3 brothers, and his son, Richard E. Hollis, Jr.
A Celebration of Life Memorial will be held Saturday, June 6, 2015 at 11:00 a.m. at Tex Ritter Park in Nederland.
Details and registry available at Melancons.org.