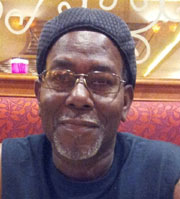 On Saturday, May 30th, 2015, the Lord called David to rest from his earthly burden at his home.
He was born on August 6, 1953 to the union of Freddie Bolden and Mary Lee Steele in DeRidder, LA.  He was a resident of Port Arthur for many years.
David was a hard working man who held many positions over the years. He was a mechanic, ship’s steward and a warehouse worker among other jobs. He was also a veteran of the United States Army, having served from 1972-1974.
In keeping with Dave’s wishes, there will be no funeral service.  A visitation will be held from 12 noon-3p.m. on Saturday, June 6 at the Gabriel Funeral Home Chapel.  The family will receive friends at the USW Hall on Jefferson Drive immediately following the visitation.
David was a man who spoke his mind and his heart.  You always knew where you stood with him.  He was also kind, generous and loving.  His children and grandchildren were his pride and joy and he loved them all dearly.
His daily presence will be forever missed by his loving and devoted wife Angela, his mother Mary Steele of Lawton, OK.,  his children Kawana Wyatt, Kemon Reed and Joanna Williams, all of Port Arthur, Cuevas Reed and Shadava Reed of Oakland, CA., his son by marriage, Patrick Green of Beaumont, and a daughter who adopted him, Delisa Johnson of Baytown.  His siblings include his brothers Stephon (Josephine) and Aubrey (Vicky) Steele of Port Arthur, Winfred Steele of Beaumont, and his sister Brenita Jones of Port Arthur. He is survived by his aunts Rose Jackson of Pensacola, FL., and Gertrude Ashley of Port Arthur, his uncle McKinley Lee, Jr. of Minneapolis, MN, 16 grandchildren, several adopted children and grandchildren and many other extended family members.