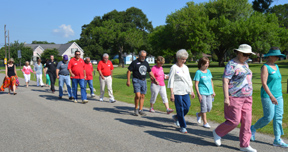 PORT NECHES — Under a canopy of blue sky Wednesday a group of prayer warriors walked in pairs near the Effie and Wilton Herbert Library, where they lifted up concerns as varied as the nation’s military to guidance for local government.
Wednesday’s Prayer Walk was sponsored by the Southeast Texas/Port Arthur Christian Women’s Club, and open to people of all faiths.
Though Wednesday’ prayer walk was not the first sponsored by the group, it was the first to go off without the interference of bad weather.
Last year’s walk was actually the first, but flooding from heavy rains marred the event enough to cancel the actual walk and have it inside the Port Neches Knights of Columbus Hall, Francine Gaspard, area representative for the local Christian Women’s Club, said.
This year, with hardly a cloud in the sky, representatives from all faiths gathered at the KC Hall and headed across the street after they were paired up and assigned a specific topic to pray for.
“We will pray for all areas: Families, churches, government, emergency personnel, military, and even those held in bondage to addictions” Prayer Walk Leader Karen Schexnayder, 57, of Port Neches, said.
Though the walking path was not long, it was in the heart of the city and symbolized surrounding the city with prayer, Schexnayder said.
In addition to Christian Women’s Club members, area churches were represented as well as Knights of Columbus members.
“We are here to support the Christian Women’s group and to show a community in prayer. It is so important for a community to pray together as a group,” Leroy Falcon, Lecturer with the Immaculate Conception Knights of Columbus from St. Peter’s Catholic Church in Groves, said.
E-mail: sherry.koonce@panews.com
Twitter: skooncePANews

PORT NECHES — The Zoning Board of Adjustment of the City of Port Neches will met at 6 p.m. Monday,... read more