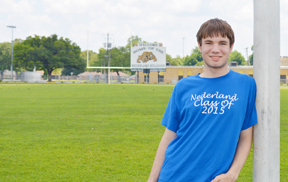 Nederland High School valedictorian Joshua Ortego, 17, of Nederland will start his studies in chemical engineering this fall as a Mirabeau Scholar at Lamar University in Beaumont.

NEDERLAND — Joshua Ortego is ready for a new stage.

The Nederland High School 2014-15 valedictorian will soon trade the NHS Performing Center for the Lamar University Theatre in Beaumont, adding his bass to the Grand Chorus until he can audition for the A Cappella Choir next year.

But the graduating senior didn’t become the top of his class — with a coveted 4.0 GPA — by spending all four years in the concert choir or even the last two in the school’s show choir, Ned and Co.

Ortego’s been working hard enough to not only secure the No. 1 position in his class of 363, but to garner the top scholarship for Lamar University. As an incoming Mirabeau Scholar, Ortego will receive an estimated $80,000 — more if tuition and book fees increase during his four years on campus — to pursue a chemical engineering degree.

“My grandpa was a civil engineer, but I’m more into the math and science aspect of engineering,” Ortego, 17, of Nederland said on the Jerry Mallory Field in Bulldog Stadium Wednesday. “Math and science just click — just come naturally to me.

“And I know chemical engineering is good for the area. I’ll be able to find work after I get my degree, probably in one of the refineries around here. I know some of our plants build plastics, so I’ll probably try to get into that. Or I may go for a master’s degree at Lamar or somewhere else.”

Ortego said once he gets to Lamar, he’s going to explore his options for performing in a more theatrical manor. In addition to the regular performances with the NHS concert and show choirs, Ortego has spent his high school career in the mix of “theater kids.”

“I’m going to miss our choir — it’s been a wild ride these last four years — but I also participate in the school musicals during the year and over the summer,” Ortego said. “We’re actually working on one now, ‘Curtains,’ that opens up June 19 and 20 in the Performing Arts Center.

“This is a complicated show. It’s about a group of actors trying to get a show onto Broadway, so I play Randy Dexter — who is trying to play Parson Tuck. But I’ve played the Ghost of Christmas Present and a townsperson in ‘Scrooge,’ and I played the coroner, a munchkin and a crow in ‘The Wizard of Oz.’”

Ortego laughed, saying his role as a munchkin was probably the most comical, though not through anything he could control. The 5’10” NHS senior said, surprisingly, he was in good company.

“All of the munchkins were taller than Dorothy — it was so funny,” he said, pausing to regain his composure. “But performing in musicals is a good life experience. You grow as a person, because you’re on stage in front of all these people.

“On top of that, you get to bond with so many people you wouldn’t normally meet. Usually, the choir kids, the band kids and theater kids are all kept in their separate areas. But in a musical, you’ve got the choir kids performing with the theater kids while the band plays down in the orchestra. Everyone’s together.”

“It’s going to be my first time staying away from home, so I’m a little nervous about that. But mainly I’m just looking forward to meeting all these new people and seeing how my classes are going to be — how different it is from high school, figuring out how to adapt and try to keep the same work ethic.”

Ortego, a member of the National Honor Society and the Spanish Honor Society, also won a $500 scholarship from Chemtex Dr. C.N. Reddy. He helped the school UIL Academic team win Sweepstakes at the District meet in Vidor as a member of the general math and science teams this year.

He lives with his mother Jean Coley in Nederland.

Note: This story has been updated to correct the spelling of Jean Coley’s name. A previous version inaccurately reported Coley as Jean Corley.

PORT NECHES — Under a canopy of blue sky Wednesday a group of prayer warriors walked in pairs near the... read more