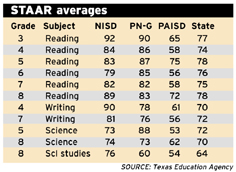 Passing rates for the State of Texas Assessments of Academic Readiness testing for students in grades third through eighth show local students scored near the state averages in many areas but some schools scoring below average.
The Texas Education Agency recently released preliminary figures for the mandated STAAR test which replaced the previous standardized test known as the Texas Assessment of Knowledge and Skills.
Third grade reading scores in Port Neches-Groves scored a 90 percent passing rate, well above the state average rate of 77 percent.
In fact, PN-G grades third through eighth exceeded the state’s average passing rates in reading, fourth and seventh grades scored above the state rates in writing and fifth and eighth grades scored above the state rate in science.
PN-G eighth graders fell slightly behind the state in social studies with a passing rate of 60 percent compared to the state’s rate of 64 percent.
“We are pleased that our district continues to score above the state in the tested areas,” Brenda Duhon, assistant superintendent for curriculum and instruction/technology, said. “We saw seven percent increase in social studies this year but will continue to work in that area.”
Nederland Independent School District also saw success with their passing rates and exceeded the state average in all of the subjects. Highlights include the third grade reading passing rate of 92 percent, fourth grade writing with a 90 percent passing rate compared to the state average of 70 percent and eighth grade social studies with a 76 percent passing rate compared to the state average of 64 percent.
“NISD is very pleased with our STAAR scores in comparison with state scores,” Assistant Superintendent Stuart Kieschnick said. “Our scores highlight the hard work displayed by our teachers and students. We will be analyzing our scores to find areas of need so that we may continue our tradition of excellence.”
Port Arthur Independent School District Superintendent Mark Porterie admits there are some areas that need improvement. The district scored below the state average in all categories but are close to the mark in some areas. Fifth grade reading scores were at 75 percent with the state average at 78 percent and eighth grade reading averages were 72 percent compared to the state average of 78 percent.
Fifth grade science, at 56 percent, was below the state average of 72 percent and eighth grade social studies came in at 54 percent compared to the state average of 64 percent.
“The Port Arthur Independent School District is reviewing the STAAR scores for grades 3-8,” PAISD Superintendent Mark Porterie said. “We acknowledge that we have work to do in order to meet and exceed our personal goals.”
The district will look at the root of the problem.
“We see that there is a great need to address literacy in the PAISD.  We realize that if a student can read with comprehension, that student will have a better chance at being successful in all areas of the curriculum,” Porterie said. “We will regroup and move aggressively in addressing all areas of concern for the 2015-2016 school year.”
Statewide figures issued y the Texas Education Agency show overall the preliminary scores remains stable for the fourth consecutive year for the results of the spring 2015 administration of STAAR.
Seventy-six percent of sixth grade students passed the STAAR reading test and the scores for third, fourth and seventh grades showed a slight increase or remained the same from 2013-2014, according to a press release from TEA.
Writing tests for grades four and seven showed 72 percent of seventh graders passed the test, an increase of two percentage points from the previous year.
Fifth graders showed a passing rate of 72 percent in the STAAR science test while the eighth grade passing rate in science was 70 percent, the same as the previous year.
Additionally, eight graders posted a 64 percent statewide average in social studies which is an increase of three points over the 2013-2014 scores.
Passing rates for STAAR mathematics in grades three and eight are not available at this time.