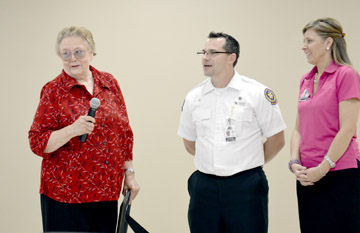 Betty Woodruff is known around Port Neches Senior Citizens Center as a lifesaver; she now has a new designation as Outstanding Samaritan.
Acadian Ambulance representatives Chris Castille, operations manager for Southeast Texas and Stephanie Garsea, regional business development manager, were on hand Monday to honor Woodruff, 76, with a framed certificate honoring her life saving skills. Back in March, Woodruff performed the Heimlich maneuver when fellow senior Thomas Wilmore began choking.
All in all Woodruff has saved four lives and all of the incidents occurred at the Senior center.
“I want to thank everybody,” Woodruff said when accepting the award. “I’m going to the chiropractor right now and may have to retire. It will be hard if I can’t do it next time and I want to do it.”
Woodruff learned the life saving technique while caring for her late husband who had problems with his esophagus which caused swallowing difficulties.
The Samaritan said she didn’t even realize she had lifted Wilmore off the floor when administering the Heimlich maneuver because adrenaline had taken over. During a previous instance when a female was choking it seemed as if she may not be able to save the woman.
“I called out to God to save her,” she said. “And I asked Sharon (Director Sharon Lemoine) to call 911.”
Luckily the maneuver worked and the woman’s life was saved but Woodruff was upset for several days afterward, she said.
Sharon Lemoine, director of the center, is proud of Woodruff.
“She’s pretty quick on her feet,” Lemoine said. “I’m especially glad she was here too. I’m not sure what would have happened.”
Garsea said Acadian Ambulance Service presents the Outstanding Samaritan award to first responders and citizens who go above and beyond the call of duty and put the needs of others above themselves.
“We are very appreciative of Mrs. Woodruff and want to acknowledge her,” Garsea said. “It’s amazing someone was willing to do this, some would shy away.”
Castille said that without the early intervention things might have ended differently.
“The community could use more Mrs. Woodruff’s,” Castille said prior to the ceremony.
E-mail: mary.meaux@panews.com
Twitter: MaryMeauxPANews

Karina Alvarez has been preparing for her future for years. Alvarez, who is valedictorian at Bob Hope School, has already... read more