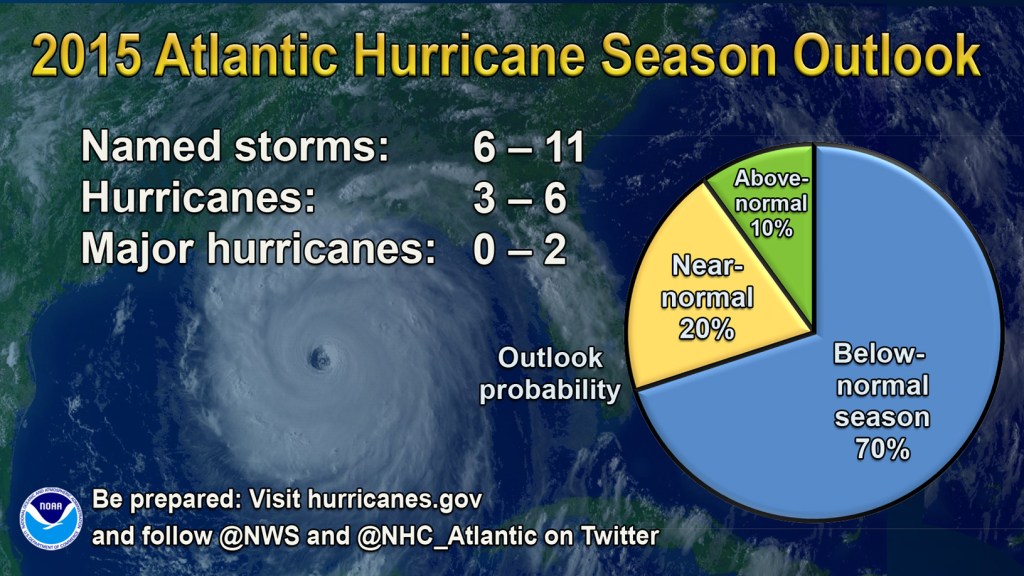 By Sherry Koonce
The News staff writer
A less than normal predicted hurricane season is not giving local emergency responders reason to sit back and be complacent, after all, it only takes one storm to devastate an area.
“If you look at 1992 it was a mild year when Andrew came in as a major hurricane. Or, look at Humberto, most of the day it was a tropical storm but at midnight Humberto became the fastest hurricane in history,” Greg Fountain, Jefferson County Emergency Coordinator, said.
The National Oceanic and Atmospheric Administration on Wednesday released its 2015 Atlantic hurricane season prediction. The season, which officially runs from June 1 to Nov. 30, will likely be below normal, the NOAA forecast.
For this hurricane season the NOAA is predicting a 70 percent likelihood of 6 to 11 named storms with winds 39 mph or higher. Of those, three to six could become hurricanes with winds 74 mph or higher, including zero to two major hurricanes, a category 3,4, or 5 with winds of 111 mph or more.
While a below-normal season is 70 percent likely, the NOAA forecast, there is also a 20 percent chance of a near-normal season, and a 10 percent chance of an above-normal season.
“A below-normal seasons doesn’t mean we’re off the hook. As we’ve seen before, below-normal seasons can still produce catastrophic impacts to communities,” Kathryn Sullivan, Ph.D, NOAA administrator, said in a press statement released by NOAA.
Sullivan also referenced the 1992 season in which only seven named storms formed, but the first was Andrew, a Category 5 Major Hurricane that devastated South Florida.
“It only takes one hurricane or tropical storm making landfall in your community to significantly disrupt your life,” Joseph Nimmich, FEMA deputy administrator, said in the NOAA press statement.
Or, for that matter, it might not even be a hurricane that has the ability to destroy a community.
“Just like what happened in Houston the other day; it does not necessarily have to be a hurricane to create a disaster in your city,” Chris Duque, Nederland city manager said.
While Southeast Texas is familiar with torrential rains that cause flooding, the area is not so familiar with tornadoes or hail storms that have ravaged the state this month.
What the region can claim is experience with hurricanes — enough for emergency responders to have solid plans in place, and to make preparations as if every hurricane season were going to be above normal.
According to Fountain, representatives from Golden Triangle cities joined others at a national and state emergency management conference in San Antonio recently.
Fountain said local emergency personnel was able to become acquainted with state and federal representatives.
The best thing Southeast Texans can do in preparation is just that, to be prepared, and not complacent because it’s been several years since Hurricanes Rita and Ike.
“People need to call their insurance companies, have a family plan, an evacuation plan, take photos of the house, all of their property including their cars,” Fountain said.
Renters should also have their belongings insured, not just homeowners, Fountain said.
“At the county level we are asking people to take personal responsibility and plan and prepare for your family because nobody will take care of your own personal preparations but you. We are ready and prepared, we just need citizens to do the same thing,” Fountain said.
In preparation for a disaster, area cities have determined essential and non-essential personnel, and made sure emergency equipment is running properly.
Groves City Manager D. Sosa said the city has a total of 40 generators purchased with grant money made available after Rita and Ike.
Duque said the city of Nederland is making a Socia media push to get people to registers with emergency notifications, either Nixle or the STAN, the Southeast Texas Alerting Network.
In the meantime, Nederland’s city staff is keeping ditches clean and making sure obstructions are out of the way so, in the event of flooding, the water will be able to flow.
“This spring we had to keep on top of that because of the rain, so we will continue doing that,” Duque said.
Like other coastal communities, Port Arthur emergency responders have met with state and federal emergency management personnel, as well as those on the local level.
“We  have an annual meeting with the mayor and city manager and all the department heads,” Major John Owens, city of Port Arthur emergency management coordinator. “ We have one recently to review our specific responsibilities within each department to ensure each department is prepared and that all essential employees are identified and have good notification information.”
Emergency responders from Port Arthur have also met with the Coast Guard and the Southeast Texas Advisory Council in preparation for the hurricane season, Owens said.
“Last year the wildfire issues in Central and West Texas reminded us hurricanes are not the only natural disasters. There can be flooding, wildfire, tornadoes,” Owens said.
The key to having a good disaster preparedness plan is to have not only the ability to respond, but to mitigate the damage.
In Port Neches, Fire Chief Stephen Curran said the city is ready to meet the challenges of a natural disaster. Like other cities, key personnel attended the state conference, and has a plan in place to evacuate to the new emergency center in Lumberton.
“Its a pretty impressive facility,” Curran said.
In case of a hurricane, Port Neches has its own impressive buildings.
A new city hall and new fire department is built to withstand winds up to 150 mph.
“We’ve been doing a lot of infrastructure hardening in the last couple of years, taking big steps to help us manage through the hurricane season when they come through,” Curran said.
E-mail: sherry.koonce@panews.com
Twitter: skooncePANews