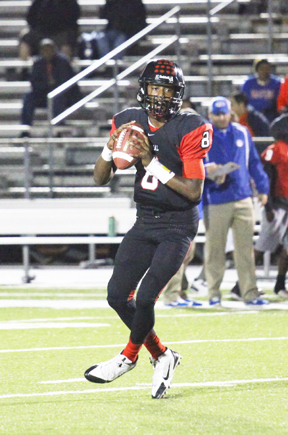 By Gabriel Pruett
The News Sports Writer
Port Arthur Memorial football coach Kenny Harrison still can only shake his head at the thought of the 2014 season.
It was a year which starting with a ton of promise and expectations. Memorial had two Division I running backs and two more DI guys in the defensive secondary with a lot of starters back in other key positions.
So 2014 was going to be the Titans year. Memorial finished 3-7 overall and 1-5 in District 21-6A play.
Memorial has finished spring practice and unlike seasons past, the Titans did not hold a spring game and instead went with a scrimmage. Harrison’s reason was a couple of injuries to players and the coach’s thought to not risk the future.
“It worked out fine because we got a lot of kids an opportunity to play,” Harrison said. “None of the injuries were major. We just did not want to risk it with a spring game.”
Harrison said he can still taste the disappointment from 2014. It was a year the Titans allowed 424 yards per game on defense and were outscored 88-46 in the fourth quarter.
“It left a bad taste in my mouth,” Harrison said. “It is something I want to put behind us as well as use it as a motivational tool. I was looking forward to getting back out there and getting the guys back to where we need to be.
“The kids were pumped up. This group of kids has won at every level starting in middle school and up to freshmen football. They are used to winning and last year was a first for them. They want to get back to winning.”
One of the stars from the spring practices was running back Marcus Younger. Younger’s role is expected to grow in 2015 with the graduation of Corey Dauphine.
The starting tailback position belongs to Kameron Martin who rushed for 903 yards and 17 touchdowns in 2014. Younger had 210 yards and two scores on 27 carries.
“Marcus is going to have a major role with the team,” Harrison said. “We will use him at tailback, receiver and in the Wildcat formation. He is fast and elusive. He is a heck of a football player so we will find ways to get him the football.”
One of the players who certainly has eyes on him is quarterback Kadon Harrison. Harrison throw for 1,125 yards as a sophomore in 2014 with eight touchdowns and 10 interceptions.
“Kadon has a lot more confidence already,” Coach Harrison said. “He has worked hard. He is 6-3, 172 so he has got stronger. He still has to have a tremendous summer. It is going to be full go with him next year. The experience last year he received will pay off. He played in 10 games against teams like Houston Lamar and North Shore. He took every snap in those games and that is tough as a sophomore.
“The season tested his character. He heard all the things being said. He endured all that stuff and finished every game.”
Memorial’s offense averaged 350 yards and 30 points in 2014.
The big question heading into next year is the defense that allowed 35 points per game and against Channelview gave up over 700 yards and over 70 points.
“Our defensive line is ahead of our offensive line at this point,” Harrison said. “Our defense has a lot to prove. Those games we gave up so many points and so many yards did not sit well with me and it didn’t sit well with the kids.
“What people do not know is last May I lost my entire defensive staff. We were wiped out. I had a new defensive staff come in during the summer. It was a bad situation and then we lost JaCorie (Jones) and CJ (Levine) to injury on top of that. It was not a good deal.”
Harrison reported there are no coaching changes at this point for Memorial except Bernard Bell will move from offensive line to coaching the safeties.