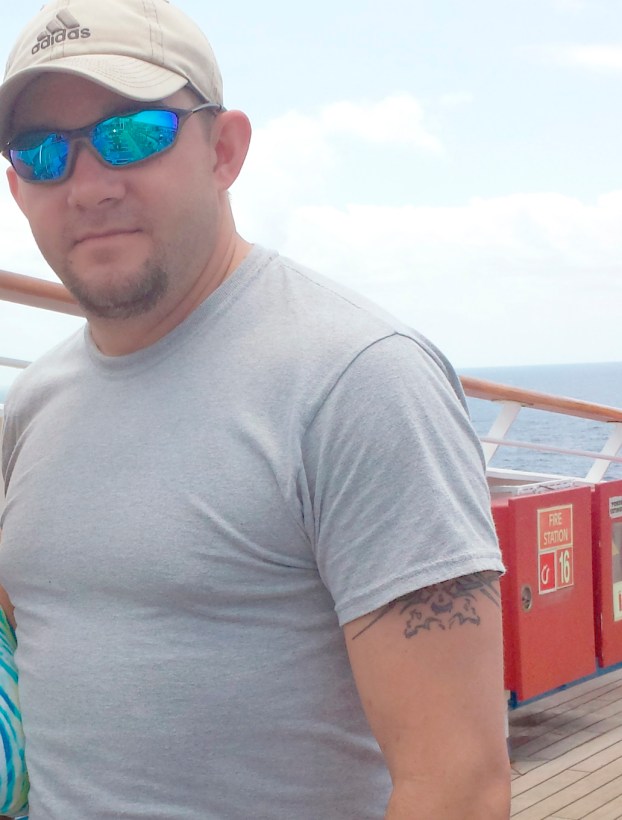 NEDERLAND — A Nederland woman is asking for clues leading to the location of her husband, whose truck was found atop the Rainbow Bridge almost a month ago.
The wife, Carol Gauthier, doesn’t believe her husband, Joseph Paul Gauthier, 32, leapt from the bridge. She believes he may have met with foul play.
Gauthier last saw her husband at around 10:30 p.m. April 29.
“He walked out the door and said he was taking a ride,” Gauthier said. “It was common for him to do that. Normally he’d be going to visit a friend for a hour, maybe drink a beer and come back. But this time was different. It ended up with a knock at my door at 12:58 a.m., I looked at my cell phone and saw the time, with a Nederland Police Department officer at my door who told me to contact Port Arthur Police.”
Family and friends of Joseph Gauthier believe something happened on top of the bridge that caused the man to leave his truck running and step out of his shoes before disappearing, she said.
One reason Gauthier believes her husband is missing due to foul play is that no body has been found.
“I’ve talked to the police chief (Mark Blanton) and Sgt. Gaspard,” she said. “Recovery is usually done within a certain time frame, and it’s past that time frame.”
Gauthier recalled a story she heard of a Louisiana woman who was thought to have jumped from a bridge in that state. The woman was found two months later living with homeless people under a bridge and possibly doing illicit drugs at that time.
Port Arthur Police Sgt. Scott Gaspard has worked with Gauthier and followed leads as they occur. But police are treating the case as a suicide because the truck was found with motor running on top of the bridge.
“We have followed every lead, and they have led to dead ends,” Gaspard said. “We are not considering a crime committed at this time. There is no evidence for us to believe foul play was involved.”
Still, Gauthier holds out hope. She has heard convenience store owners say they have seen her husband since he went missing, although he has not contacted his mother, his wife or his daughter.
Joseph Gauthier is employed with Absolute Construction and is well known in the area, having welded large metal fences, she said. He has also lived in the Port Acres area of Port Arthur and in Groves in the past.
She also hopes someone may have seen his truck traveling the bridge or near it around that date he went missing.
Gauthier said she worries that her husband’s disappearance will be considered a suicide, then years down the road his remains will be discovered and a criminal trail would be lost.
Anyone with information about Joseph Paul Gauthier’s whereabouts can call the Port Arthur Police Department at 983-8600.
E-mail: mary.meaux@panews.com
Twitter: MaryMeauxPANews

Vidor Police checking on the welfare of a teenager were led on a chase by a suspicious person through two... read more