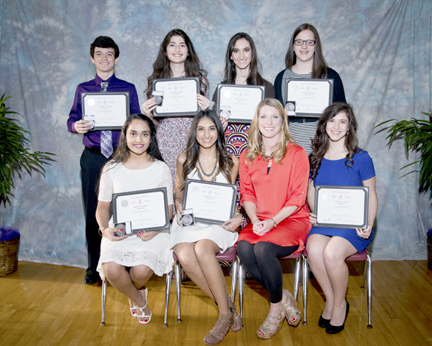 PORT NECHES — The top two percent of Port Neches-Groves High School’s 2015 graduating class is a group of seven students with lofty goals and the determination to fulfill their dreams.
• Tala Abu-Shami, 18, will soon be heading out to the University of Texas at Austin where she will major in biology (pre-med).
Ten years from now she sees herself about to graduate from medical school and begin her career as a pediatrician.
Abu-Shami said her brother, who was his class valedictorian, inspired her to academic excellence ad encouraged her to strive for that as well.
Abu-Shami did set out to be at the top of her class, she said.
“I was at my old school in Las Vegas and planned to remain at the top even though it was difficult at first,” she said.
The class that gave her the most difficulty was advanced placement physics II.
Abu-Shami is president of the Spanish Club, member of the National Honor Society, DECA and reporter for the school’s Family, Career and Community Leaders of America.
She is the daughter of Maysoon and Kamal Abu-Shami.
• Priya Amin, 17, is looking toward Massachusetts and Harvard University where she will major in biology.
A decade from now she hopes to be attending medical school and performing research in genetic engineering and oncology.
Her brother, Anuj Amin, has given her the most inspiration and support to push herself, she said.
Amin said she challenged herself to be the best she could be and added that with  hard work you can achieve anything.
The class that gave her the most difficulty was advanced placement physics.
Amin is a member of the University Interscholastic League math, calculator, number sense and science team, member of the Key Club and National Honor Society. She is also a member of the Indian Association of Southeast Texas, student of Sreepadam School of Arts and does charity work.
She is the daughter of Nisha and Murlidhar Amin.
• Bailey Brevell, 17, will head to Lamar University and major in biology with a concentration on pre-med.
Ten years from now Brevell sees herself graduating from medical school and pursuing a career as a pediatrician. She also sees herself starting a family by that time.
Brevell credits her parents and grandparents for inspiring her to success, adding that being at the top of her class has been a goal since middle school.
“Education has always been one of my top priorities,” Brevell said.
Advanced placement government/economics gave her the most difficulty.
Brevell is a member of the National Honor Society, Key Club, Indianettes, Spanish Club and UIL Academic Team. She is a 15-year dance team member and a member of the Catholic Youth Ministry.
She is the daughter of Mark and Brenda Brevell.
• Azra Habib, 18, is ready to head out to McCombs School of Business at the University of Texas at Austin to major in business.
Ten years from now she sees herself in an executive hospital administration position at a well known hospital such as Methodist, Memorial Hermann, or MD Anderson Cancer Center.
She counts her parents and sister as the ones who most inspired her to success.
The class that gave her the most difficulty was AP government/economics.
Habib is a member of the Spanish Club, National Honor Society, DECA senior representative and Technology Task Force senior representative.
Habib is the daughter of Hussain Habib and Yasmeen Habib.
• Sarah Harvey, 18, plans to attend the University of Mary Hardin-Baylor where she will major in Christian ministry and marketing.
Ten years from now Harvey sees herself living a life on a mission for God by serving with a non-profit organization  as head of marketing or on the mission field in a foreign country.
Harvey credits her ‘incredibly encouraging parents’ with inspiring her to success. She also set out to be in the top two percent of her class throughout her high school career.
The course that gave Harvey the most difficulty was that of Jessie Burkle.
“Her American history, AP government, AP economics and AP English IV courses were all immensely difficult,” Harvey said.
Harvey is a member of the band, National Honor Society, UIL Ready Writing/Social Studies/Literary Criticism as well as a member of First Baptist Church Port Neches Real Life Youth Group and KLBT 88.1 Christian radio volunteer.
She is the daughter of Ron and Jeanette Harvey.
• Victoria LaFleur, 18, will soon head to Lamar University where she will major in both accounting and finance and 10 years from now sees herself graduated from law school and practicing law.
LaFleur said her parents inspired her to academic success.
The course that gave LaFleur the most difficulty was AP U.S. government/economics.
LaFleur is a member of the National Honor Society, DECA, student council and Spanish Club as well as a member of Young Life.
She is the daughter of Dale and Christie LaFleur.
• Jerrad Long, 17, plans to major in chemical engineering at Lamar University and is an honors college member.
Ten years from now Long sees himself with a masters degree in chemical engineering and with a job at an oil company.
The idea of being successful motivates Long and knows that trying hard in school will provide him with more opportunities.
When asked is he set out to be at the top of his class, Long responded by saying yes.
“I’ve always been competitive, especially with academics. I enjoy challenging myself,” Long said.
English was the most difficult course for Long because, he said, he doesn’t like to write papers. Math and science are his favorite courses.
Long is a member of the National Honor Society, student council-advisory vice-president and varsity track as well as a volunteer at Southeast Texas Food Bank.
Long is the son of Jerry and Stacy Long.
E-mail: mary.meaux@panews.com
Twitter: MaryMeauxPANews