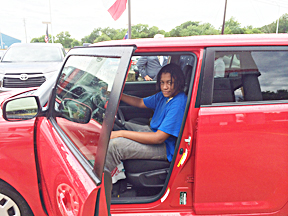 Calvin Barnes, a Nederland High School sophomore, won the car giveway drawing from Philpott Motors Wednesday morning and went home with a 2014 Scion XB as a reward for having less than three absences in the 2014-15 school year.

Thewman calls the special form of torture “playing games,” with the goal to start off with a huge selection of students and slowly narrow the list down to the lucky winner.

But Thewman said he knows which student is leaving campus with a new car the entire time — he puts the name of the student inside his suit pocket before heading over to the Nederland High School Performing Arts Center.

Sophomore Calvin Barnes was the lucky student Wednesday morning. His perfect attendance status — less than three absences for the 2014-15 school year — and sheer luck of the draw earned him a red 2014 Scion XB.

Thewman said the perfect attendance car giveaway program has been one of Philpott’s best partnerships since its inception in 2002.

“Perfect attendance is a big revenue generator for all public schools. Not only that, but our students get so much more out of their education if they’re in class every day,” Thewman said Wednesday. “Gail Krohn (former Nederland Independent School District superintendent) approached us 13 years ago to see if we would be willing to donate a car to award students for perfect attendance.”

Thewman said Philpott Motors jumped on the new incentive program to add to its list of community sponsorships and other contributions.

“It’s a very rewarding thing to be able to give back to the community, and Philpott has always partnered with events and organizations that make sense,” he said. “This was a no brainer.”

Thewman said since the program began, the Philpott Motors management group has taken the lead in selecting a “kid-friendly car” to donate, as well as other relevant prizes. This year’s drawings included not only the Scion XB but several iPad Minis and Selfie Sticks.

“Once we finally give away the car, we always call the student’s parents in front of the entire school,” Thewman said. “Today we called Calvin’s mother, and she asked if it was a joke. We let her know it absolutely was not a joke and that perfect attendance — any student’s success — all starts with the parents. So we congratulated her, as well.”

Barnes’ name was drawn out of 1,490 students at Nederland High School with perfect attendance. The high school population’s attendance has consistently hit above 96 percent since the car giveaway program began in 2002.