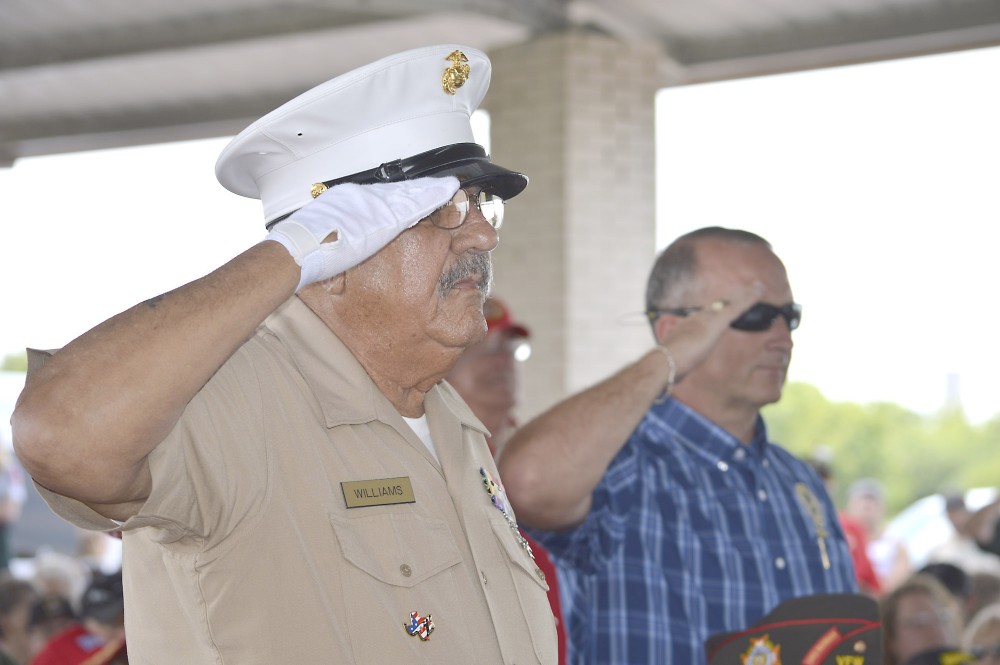 The skies cleared and rain stayed away as fallen veterans were honored during two separate ceremonies on Memorial Day.
Members of Southeast Texas Service Group illustrated the image of veterans who are missing in action or prisons of war with a Round Table Service during the celebration at Veterans Memorial Park on Monday. One by one a member from each of the branches of the military somberly circles the white table clothed table and placed the hat of that branch on the table. Ret. U.S. Marine C.P. Williams narrated the solemn event talking about ‘answering the call’ — from Valley Forge to President Theodore Roosevelt’s Rough Riders and the Battle of the Bulge to raising the flags at Iwo Jima.
From Korea to the rice patties of Vietnam to Cambodia… the list went on and on up to present day.
“America has always been a beacon of freedom,” Williams said. “But let us remember their absence.”
The table setting symbolizes the different branches of military while the single rose the sacrifices of the veteran as well as family and friends who wait for their return.
“The glasses are inverted, they cannot toast with us today,” he said. The chairs are empty, they’re not here. The candle is reminiscent of the hope that lies in our hearts that they are away from their captors and coming home to the open arms of a grateful nation.”
U.S. Marine veteran Dan West, state commander for the Veterans of Foreign Wars, was guest speaker, spoke of Calvin Titus, who played  a major role in the China relief Expedition and the capture of Peking in 1900.
Barely a teenager at the time, Titus answered the call to arms and against all odds scaled a 30-foot wall unarmed. He is remembered for stepping forwarding and saying “I’ll try.”
“He said those two words, I’ll try. I ask you that when that call for volunteers goes out you can say ‘I’ll try,” West said. “The men and women we are here to honor said those very words.”
An earlier celebration occurred at Oak Bluff Memorial Park in Port Neches that focused on the sacrifice, commitment and courage of the veterans who are no longer here.
The Rev. Jason Burden of First Baptist Church of Nederland told a crowd of dozens of the Biblical King David’s mighty warriors and of paying tribute and thanksgiving to the military men and women who lost their lives.
“Greater love hath no man than this, that a man lay down his life for his friends,” Burden said quoting John 15:13.
This, he said, is what these brave military men and women did for our nation.
E-mail: mary.meaux@panews.com
Twitter: MaryMeauxPANews

Cousin of woman found on island: “I’m going to be her voice”

The men behind the service — SETX veterans work…