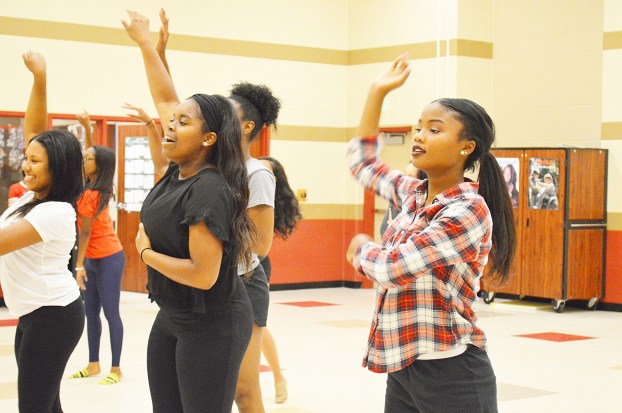 Memorial HS to present ‘A Woman’s Worth’

Showcase aims to turn dancers into vessels of empowerment

The girls of Memorial High School’s Advanced Dance 3 class belted song lyrics while they stretched and warmed up in their rehearsal space on campus Friday.

Their instructor DaVonna Malveaux, a substitute whose been teaching 10 dance classes at Memorial since January, said the students were “amped up” — thinking about prom, the end of the school year and the first dance recital the school’s had since the regular teacher took off work over a year ago.

Malveaux said she knew as soon as she came in as a substitute, she didn’t want to sit the girls in front of a TV or come up with a bogus curriculum. Dancers are meant to dance, she said, and Malveaux was determined to give them a performance outlet.

Memorial High School will present “A Woman’s Worth” spring showcase at 6:30 p.m. Tuesday in the high school auditorium. The show features eight dances with “moments of empowerment” between each choreographed routine.

“I love it, because this is the first year we’ve had a recital since I’ve been to Memorial,” junior Ragiana Harris, an Advanced Dance 3 student, said Friday afternoon. “I appreciate Ms. Malveaux for putting on the showcase. She didn’t have to do this for us. I’m just excited to get to perform in front of an audience.”

The Advanced Dance 3 class is performing in “Pretty Hurts,” a contemporary piece originally choreographed as a solo for Malveaux.

“These students are actually performing a solo I did in college,” Malveaux said. “It’s all about self-esteem, self-value and worth. The students said they felt proud I taught them one of my dances, because I believed they could do it. Most of these students are on the drill team, and a lot of them have outside-of-class training. I know they can pull this off.”

Marissa Jacquet, a junior in the advanced class, said she felt empowered to perform one of Malveaux’s old numbers.

“It almost feels like it was made for us,” Jacquet said. “Our dance represents not letting any one knock you down. You just have to carry yourself a certain way. Sometimes you can be pretty on the outside but hurting on the inside.”

Ca’Sundra Roberts, a junior performing in “Pretty Hurts” and “Phenomenal Woman,” said the showcase offers a variety of dance styles — all with a women’s empowerment theme. In “Phenomenal Woman,” Roberts and her classmates dance out a poem by Maya Angelou.

“The students are expressing different phases of being a woman and the different emotions that come easily to women,” Malveaux said. “A lot of the classes choreographed their own dances and picked their own music. We didn’t have a particular theme in mind when we started working on the show. It wasn’t until we brought it all together that I realized the central issue to all the numbers was women — women’s strength, women’s feelings, women’s pride.”

Jacquet said she thinks it’s important for the community to come support high school performers. Women, she said, will obviously love the show, but the takeaway could be much more profound for men.

“I want everyone to come see the show so they can understand the power of women,” Jacquet said. “We’re not just staying home cooking and cleaning. We’re so much greater. We’re strong. We have worth, and we know it. It’s all about women’s empowerment, and I’m proud to be a part of something like this.”

“A Woman’s Worth” spring showcase will start at 6:30 p.m. Tuesday and last about an hour, Malveaux said. There is no admission charge.

The Memorial High School auditorium is located at 3501 61st St. in Port Arthur.

Tekoa Academy has nine students in grades 6th-8th that have been accepted into Purdue University 2015 Science Scape Program in... read more