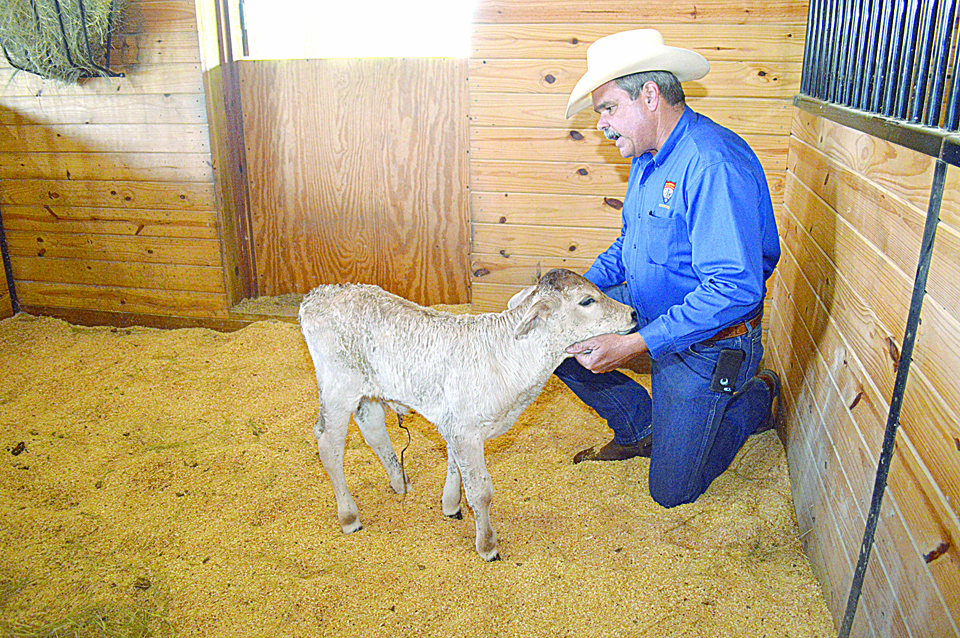 BEAUMONT — Any rancher or wildlife lover in Mid- and South County would recognize “Stretch.”

A Jefferson County Sheriff’s Office livestock enforcement officer, Deputy Donald J. Metts is easily recognizable. His size alone is impressive — a full head taller than anyone 6’2” — but he couples the height with a comfortable, and authoritative, cowboy look.

Worn cowboy boots peek out of his straight, dark blue jeans. A fire-engine red button up monogrammed with the word “Livestock” tucks into the pants. A hand-tooled leather belt with gun holster completes the cowboy look. The gun safely holstered screams “officer of the law.”

Jefferson County Commissioner Brent Weaver, representing Precinct 2, said he knows County ranchers have grown to respect, even love, Deputy Donald “Stretch” Metts — which makes his retirement after 28 years so much harder for the people of Jefferson County.

“Today we are proud to recognize Donald J. Metts, also known as ‘Stretch,’ for 28 years serving Jefferson County,” Weaver said during a Commissioners’ Court meeting at the County Courthouse Monday afternoon. “He has made an outstanding contribution to law enforcement, and not just as a livestock enforcement officer.”

Weaver awarded Stretch a certificate of recognition and a folded U.S. flag — one that has flown over the Jefferson County Courthouse in Beaumont.

“It’s been a really great 28 years,” Stretch said. “I’ve really enjoyed it. Sheriff Woods is my third sheriff to work for since I’ve been here, and I appreciate him. I appreciate you, Commissioner Weaver. We served way down the totem pole when I first got on, and I will always appreciate what you have done for us.”

When Jefferson County Sheriff Mitch Woods stepped up to the podium inside the Commissioners’ Courtroom, he joked he would tell the audience “the truth” about his friend, Stretch.

“Stretch has worked for three sheriffs — that’s true — but he’s left me twice. It’s kind of hard not to take that personally,” Woods said, with a laugh. “He was a livestock deputy when he left me the first time, and I was so happy when he came back. He’s not even left yet and I’m already getting phone calls about who is going to take his place. That speaks volumes to me about his relationship with the ranchers. He’s been around a long time and everybody loves him.

“Whoever replaces him will literally have big shoes to fill,” Woods added, turning to stare at Metts’ cowboy boots and moving his whole head up to look beyond his own eye level and into Metts’ face.

Commissioner Michael Shane Sinegal, serving Precinct 4, joked Stretch has actually been practicing his free throws to go join the Houston Rockets as soon as he retires.

Commissioner Everette “Bo” Alfred, representing Precinct 4, mentioned a calf Stretch rescued from a mud hole near the Intracoastal Canal in March. Stretch found the owner of the calf not long after he rescued it, but the owner gave the baby cow to Metts as a ‘thank you.’ Stretch and his wife have more than 40 cows on their land in Fannett. He named the rescue calf “Finally” in memory of his struggle for freedom and the eventuality of his rescue.

“That one little calf is going to be thankful you stuck around these extra months,” Alfred said. “We’re all happy to hear you’ve taken him in. We know every animal lost is a big hit to our ranchers.”

Weaver said “through hard work and a commitment to excellence,” Deputy “Stretch” Metts has earned the respect of his fellow deputies and the people he serves out on call.

“He has shown an unselfish devotion to the common good of Jefferson County,” Weaver said. “He is a valuable employee, and we all wish him well in his retirement.”