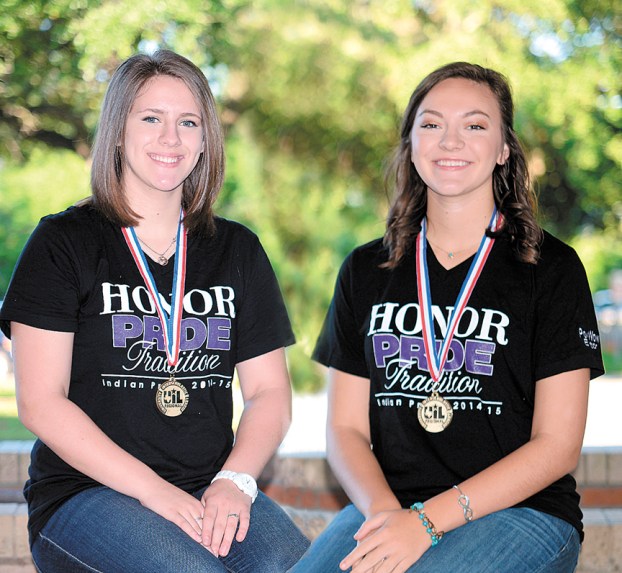 PORT NECHES — After winning gold medals at the Regional University Interscholastic League Academic Meet, two Port Neches-Groves High School journalists will compete at the State Meet in Austin on May 26.
Senior Laurel Brittain and sophomore Madison Hamby advanced to the highest level of state competition after placing first in Feature Writing and News Writing, respectively, at the Regional UIL Meet held at Magnolia High School on April 11.
Brittain will be making her second appearance at the state level, while the trip will mark Hamby’s first time to compete at the University of Texas campus. Brittain competed in 2014 in the News Writing contest after placing first in that category at the regional level
“I was so surprised when I heard that I won the Feature Writing contest at regional,” Brittain said. “Throughout the duration of the UIL season, I wasn’t on my A-game. Because I hadn’t done that great, I was extremely nervous when the regional competition started. It was a tough story to compose, but I have been practicing since the district meet, so I guess my hard work paid off.”
Hamby said that she is very excited about the contest, but admits to being a little nervous.
“Being one of the youngest students in the competition has definitely been intimidating,” she said, “but it has helped my confidence in my writing grow a lot.”
With the two journalists qualifying, 2015 marks the ninth consecutive year that PN-G will have had a journalism student competing at the state meet.
“I couldn’t be more proud of these two,” journalism adviser Janis Ryan said. “They worked very hard throughout the UIL competitive season, placing at every invitational meet and winning at district. We tied with the Nederland team for the district title this year, and were the second place team at the regional level.”
The UIL News Writing Contest requires that students write a complete news story from a “prompt,” which provides a situation, quotes from people involved, and necessary additional information needed in order to complete the story. Students have 45 minutes to write their stories, which are then evaluated by a team of judges.
Hamby said that she likes the challenge.
“The News Writing contest takes a lot of critical thinking,” she said. “I am excited to see the topic for state because I have a feeling that it will be difficult. I try to go into every competition having fun and doing the best that I can.”
In the Feature Writing competition, the contest resembles News Writing, in that students are given a prompt from which to write a story. But, that all changes at the state level. A guest speaker is brought in and students are given a fact/bio sheet on the individual. Students must ask questions in a press conference and procure their own quotes needed for the story. They then have one hour to write.
Ryan said she believes that both Brittain and Hamby are up for the challenge.
“There’s a lot more pressure at state for Laurel because you really have to be on your toes and get your own quotes from the press conference,” Ryan said. “My students write self-generated feature stories all the time, so it’s not that different for them. Both Laurel and Madison are great writers and I know that they will do well. They do their best work when under pressure.”
Brittain said she is ready for her return trip to Austin.
“This time I’m taking the competition seriously,” Brittain said. “Last year, I wasn’t as prepared as I needed to be and I wasn’t completely focused on winning. But this year, my second round, I’m giving it my all.”