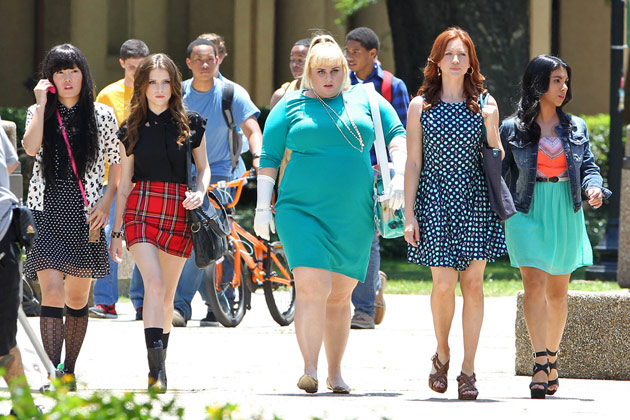 With an infectious mix of pop music and girl power comedy, “Pitch Perfect 2” is one of those rare sequels that ends up being better than the original film. That’s no small accomplishment, given that the first film was such a pleasant surprise at the box office and on home DVD.
Expect more of the same as we catch up with the a cappella group, The Bellas suffering through a traumatic (and hilarious) wardrobe malfunction during a command performance in front of the President of the United States.
Humiliated, they are given a shot at redemption representing Team USA at the world championships, but only if they can beat the highly favored German team, known as Das Sound Machine. It would seem to be an impossible task, but never fear, as you can count on the Bellas learning a few last-second life lessons about the power of sisterhood before pulling together for their musical showdown and the requisite happy ending.
The only thing left in question is whether or not we’ll see another sequel anytime soon.
I certainly hope so, as I find the “Pitch Perfect” movies to be delightful. The pop music mashups fill me with nostalgic happiness and the characters are starting to feel like old friends. What’s more, this is a film that passes the Bechdel test with flying colors, relegating boys to the back burner this time around. That puts the emphasis on the competition and friendship, which allows the filmmakers to concentrate on the film’s emotional strengths rather than try to cram unnecessary romantic subplots into the mix.
It’s also interesting to note that actress Elizabeth Banks makes her directorial debut here and she proves to have a natural ability to handle the film’s comedic moments as well as the showstopper musical numbers and the quieter emotional scenes. She’s also quite good in front of the camera, as she and John Michael Higgins, playing the clueless TV commentators, once again provide many of the film’s funniest lines.
Rebel Wilson also continues to shine with her showy performance as Fat Amy. The filmmakers wisely give her much more to do this time around, which pays off with hearty laughs. Only Anna Kendrick seems somewhat diminished in “Pitch Perfect 2,” although that’s to be expected in a film that focuses on Team USA’s shot at musical glory.
Fans will be happy to note that there is still plenty for the Bellas to accomplish in “Pitch Perfect 3,” particularly with the addition of Hailee Steinfeld to the cast. It may be difficult to live up to the standards set by the first two movies, but I can’t wait to see what happens next. Let’s only hope that we don’t have to wait three years for the next film.

Weekend Ticket: LSC-PA to host Seahawks on the Seawall