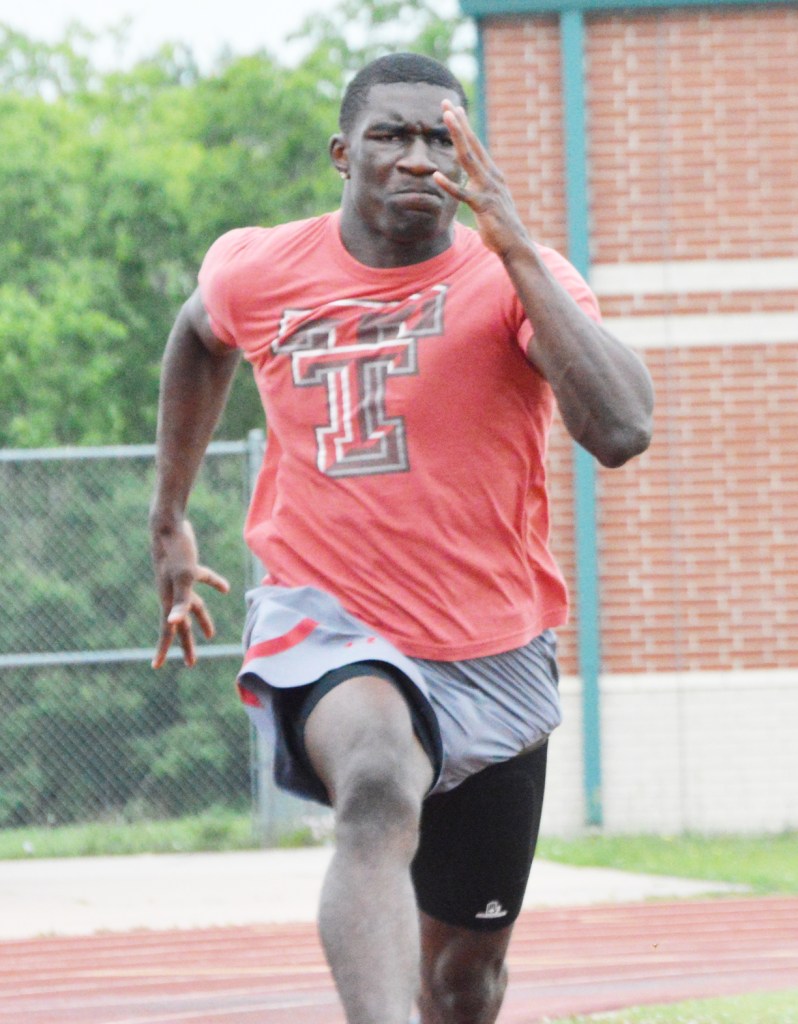 Gabriel Pruett/The News Port Arthur Memorial senior Corey Dauphine defends his state title in the 6A 200-meter dash Saturday at about 8:40 p.m. at the University of Texas.

By Gabriel Pruett
The News Sports Writer
For such a popular young man, it is a rare occurence to be at a Port Arthur Memorial track practice and here the name Corey Dauphine actually come out someone’s mouth.
Chants and yells of ‘C-Bolt’ have become familiar over the last few years. Dauphine was given the nickname by Memorial coach Verril Young to compare the speed Dauphine has shown to the Olympic champion Usain Bolt.
More than 80-percent of the time his name is called out, Dauphine does what the Texas Tech signee always does — stays quiet and focused.
Even after receiving 17 college offers before signing with the Red Raiders this past February, Dauphine’s mindset has not changed.
He wants the Titans track team to walk away as team state champions. It is all he and his teammates have talked about since last May. He wants his teammates to win medals after Dauphine was the lone Titans trackster to do so in 2014.
Dauphine wants it all yet his humble nature does not allow him to think it is title or bust.
“Things happen for a reason,” Dauphine said. “I wouldn’t be mad or sad if we don’t wind up with the team title. If I see we tried our best, you can’t be mad at that.
“Seeing my boys on the podium with me, that is what I wanted last year. We came up short. That was my goal again this year. I want them to have the same recognition I had last year after winning the 200.”
One other goal for Dauphine after the races are complete Saturday is to be able to celebrate in fashion.
After winning the 200 at last year’s state meet, Dauphine learned the apartment his mother and him shared had been lost to a fire. The news got to Dauphine just moments after his winning time of 20.76 so his mood was somber.
“I want to have a little bit better feeling this year,” Dauphine joked. “I told my momma not to cook a lot this weekend. I don’t want to hear anything about fires. Stay away from the kitchen. I will feed myself.
“I am going to enjoy this weekend and have some fun with my friends. We are going to relax and go do what we are capable of doing on the track.”

The Titans do have an outside shot at the team championship with runners competing in both the 4×100 and 4×200 meter relays and Dauphine going in the 200-meter dash. Three gold finishes would give Memorial 50 points. Humble Kingwood won the title last year, in Class 5A which is now competing as 6A, with 39 points.
The Titans are heavy favorites to win the 4×200 after setting the national record a few weeks ago with a time of 1:23.84. A first place in what is scheduled to be the Titans second race would give Memorial 20 points. Dauphine ends the Titans schedule and a win for him tacks on 10 more points.
So the most important race for the Titans is expected to be the first one of the day, the 4×100 scheduled at 6:15 p.m. Saturday. A first place finish gives 20 points and even if the Titans finish second and get 16 points, Memorial likes its chances sitting with 46 points if the 4×200 and 200-dash bring Port Arthur gold medals.. Third place in the 4×100 combined with two other gold medals ends with 42 points.
“That is a very, very important race to me and our team,” Dauphine said with more emotion than he has given out in any past interview. The young man even used his hands to show exactly what he thinks of the first relay event.
“It can set that tone and show every other team in Austin, we aren’t there to play. We mean business. A first place in that event will have some people scared. That is what we want. We want people scared and to fear us.”
Dauphine and his teammates are hungry, even if his mother is not allowed to do the cooking. He had one final line to give about this weekend in Austin.
“Let’s eat.”