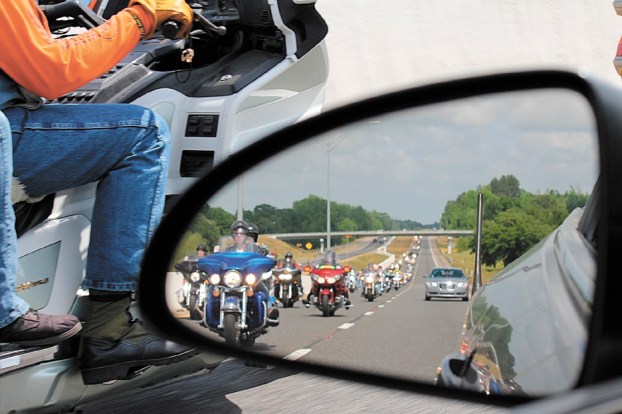 Photo by Linda Guillory The long line of Bikers can be seen in the rearview mirror As well as alongside in the left-hand lane. Riders are on their way to Washington DC as they Run for the Wall.

Local bikers team Run for the Wall from California to D.C.

By Linda Guillory
Special to The News
Memorial Day is right around the corner and three local bikers are heading out to Ontario, Calif., to ride the Southern Route of the Run for the Wall. The 27th annual ride began Wednesday, May 13, and ends Saturday, May 23, in Washington for the final ceremonies to be held Memorial Day weekend.
Michael “Wizard” Turner, along with the husband and wife team of Jennifer and “Chicken Joe” Connors, expected to head out at 7:30 in the morning for the initial trek to California. The group holds leadership positions in the organization. Joe “Chicken Joe” is assistant route coordinator, while his wife, Jennifer “Flame” Connors is the missing man coordinator and Michael “Wizard” Turner is the Honor Guard coordinator.
There are three routes to this ride, which includes the Central, Midway, and Southern Routes. The focus of our locals is the Southern Route. On the first day, May 13, the group will leave Ontario, Calif., and end up in Phoenix, Ariz., for the night. The second day will land them in Las Cruces, N.M., and the third day is overnight in Odessa, Texas. On Day 4, the group will sleep in Grand Prairie, Texas.
The fifth day will be a Texas day as the group leaves Grand Prairie through Terrell passing by Tyler to lunch in Longview with final destination being Monroe, La. This day is especially special as an opportunity for the HOG – Harley Owners Group members to watch on I-20 as the RTFW team passes by on the way to Longview. The HOG group is having a rally in the city of Tyler that weekend and there will be over 1,000 bikes participating in that event.
This annual event is a once-in-a-lifetime event for some and an annual pilgrimage for most. This Run for the Wall Ride and Rolling Thunder are the ultimate way to honor Veterans who were POW or MIA. A group of 435 pre-registered bikers and others will gather at Arlington National Cemetery Saturday, May 23, with a group photo taken at the Lincoln Memorial, and a Mission Accomplished Plaque will be presented at the Vietnam Memorial Wall. On Sunday, Rolling Thunder participants will take the “Ride for Freedom” which will depart from the Pentagon parking lot.
Joe Connors has attended this event for nine years so far and plans to continue to do so and participate in leadership capacities as long as he is able. His other job during the year has been as leader and Chaplain of the local Red Knights chapter, as well as being an international director for Region 6 Red Knights.
His wife, Jennifer, started the journey and has completed eight missions so far. She is a librarian and archive manager for the Stark Foundation in Orange. The third rider is Michael Turner, who is retired from Valero. When asked why he is taking this three-week trip, Wizard laughed and said “Joe made me do it.” This is only his second year to participate, and he’s already landed a leadership position. Michael is riding his ride in honor of Port Arthur native, SSG Ronald Earl Ray, who served in the U.S. Army.
The ride is memorable, poignant, and tearful at times for those riding and for those who go out to see the motorcycles as they pass by on the Interstate. Chase vehicles and registration teams also support the police-escorted ride. Throngs of people can be seen on overpasses waving flags, waving hands, and smiling as the Motorcycle riders pass underneath. Jennifer said, “It brings tears to my eyes every time I see the people above us. They are so enthusiastic and it’s such an honor to do this.”
Many times, the riders are honored by various groups such as the American Legion, Elks, VFW chapters and Community Centers with a donation of gasoline for their motorcycles. The fueling of over 400 bikes at a time usually takes only 30 minutes because of the organized system in place. It is amazing to watch them pull in to the pumps and off to lunch in such a short span of time.
Most of the supporting clubs and cities work tirelessly all year to raise money to provide breakfast, lunch or supper for the group as well as snacks, drinks and memorabilia of their own loved ones to be left at the Vietnam Wall upon arrival. The event culminates in Washington with over 1,200 motorcycles from all over the country for this memorial event.
More information can be found on the website www.RFTW.org or by typing Run for the Wall in a search engine. Special blessings to our local veterans and those who participate in this event, and for their safety on this journey.

About 100 people gathered Tuesday to celebrate the maiden voyage of a Dutch heavy lift transport vessel that delivered its... read more