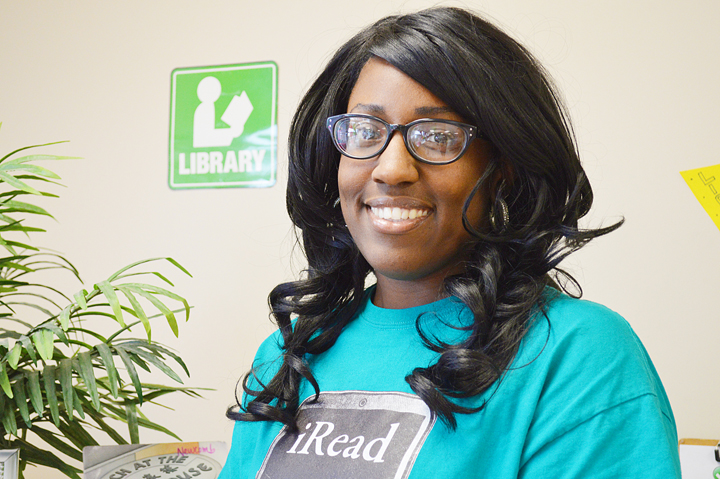 Bright, colorful posters line many of the second-floor windows, a Word Wall designed for games takes up real estate along the back wall, and a “vocabulary chain” links all the students’ newly discovered words together — physically making the connections between one word to the next.

“I have the students pick words they think their classmates may not know so that we can all learn from each other and help ‘link’ together our knowledge we’ve gained over the year — because we have to be able to make all those connections for ourselves, or we won’t be able to successfully apply that knowledge in a real setting,” Dominick, 34, of Port Arthur said.

Dominick’s passion for giving her students interactive and tangible resources for success has attracted the good will and admiration of her peers at Abraham Lincoln Middle School. They rallied around her methods by nominating her as the Campus Teacher of the Year, but — Dominick said, to her surprise — a group of retired school teachers pulled her out of the campus-level awards and named the sixth grade English teacher the Port Arthur Independent School District’s 2014-15 Secondary Teacher of the Year.

Dominick said her most important goal is to foster a love for reading and writing — hence, the in-house library. The students are encouraged to sign out books through “Dominick’s Library Check Out” sheet, attached to a clipboard hanging from the wall. From there, they may bring them home or sit on one of the cushioned crates Dominick has arranged around the corner reading nook.

“Everything in my classroom is about giving my students as many tools and resources as I can squeeze in,” Dominick said, laughing. “It’s important to me that I can offer them not just the books we’re reading in class but books that they’ll be interested in reading on their own. Because the library is mostly for leisure reading, I try to give them as much variety as I can and highlight certain topics throughout the year.

“For example, I highlight books for each month. Right now it’s Asian-Pacific American Heritage Month, so we’ve got those books front and center. We highlighted certain books for Black History Month and for Women’s History Month. I’ll pull books I think are great for ‘inspiration,’ and I’ll usually pull some specifically for girls or boys.

“When I’m teaching, it’s really helpful when you can pull a book with an example of what you’re discussing in class. I use it to help the lesson, but mostly these are for the kids’ enjoyment. I try to keep up with what they’re interested in reading, although that can be a challenge some days.”

Dominick said she’s always had a library in her classroom, although only two of those years have been in her current second-floor oasis. Dominick got her start in the Port Arthur Independent School District teaching English to sixth, seventh and eighth graders over at Stephen F. Austin Middle School — what is now the Memorial Ninth Grade Center. She spent five years at Stephen F. Austin before moving to Abraham Lincoln Middle School, where she has spent the last four years exclusively teaching sixth graders.

“Sixth grade is my favorite, no doubt,” Dominick said. “I wouldn’t call them babies — but in a way they are. It’s very nurturing. I can still shape and mold them. I want to guide them now, before they think they’re too grown and don’t need any advice. They come to this school, and it’s like a shock to the system — until now, they’ve been in elementary school. So they move up to middle school, and then they’re going through puberty and all that. But in sixth grade, they still want to give me hugs and welcome me to be a bigger part of their life. I’m here to guide them as much as I can.”

Dominick said her nurturing aspect has always fueled a desire to help children, but her career path didn’t take shape until she was already taking classes at Lamar University in Beaumont.

“Now I want to, ultimately, be a counselor. I feel like we’re counselors already in the classroom,” she added, laughing. “I’d like to get my administrative education master’s degree in counseling, and then I can transition from teaching to working as a school counselor either in middle or elementary school.”

Dominick said she’s planning on taking the GRE in the fall so that she may begin working on her master’s degree through Lamar University.

Dominick and her husband Corey have two daughters — a fifth grader at William B. Travis Elementary School and an eighth grader at Sabine Pass School.