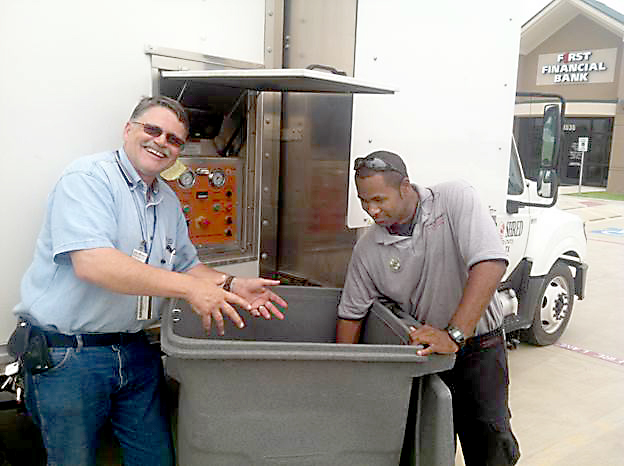 How much does a ream of paper weigh?
We won’t tell. You have to ask Ray Thompson of ArmorShred. You can’t miss him. He’s often sporting a name tag that lights up in red letters. And, he’s got the paper quizzes. Run into him at a chamber mixer, and his opening line is often fun facts of the paper world.
This Port Arthur-based businessman knows about paper, and destroying paper. His truck will pull into your business and shred all those documents you don’t need, and don’t want anyone else to see.
And for those of us who really want to make sure the job is done, they are invited to watch the truck’s monitor showing what’s going on in that vehicle. If you’re don’t have a business, but a household with outdated paperwork taking up space, just give ArmorShred a call and arrange to meet the truck.
“We recycle 100 percent of the paper we shred,” Thompson said.
ArmorShred has earned the Greater Port Arthur Chamber of Commerce Ambassadors’ business of the month honor for April.
Calvin Hicks, ArmorShred employee, said he supports this honor for his company, based on Thompson’s character.
“He’s the best boss I’ve ever had,” Hicks said.
ArmorShred does tears it up, literally, from Anahuac to Jasper to Lake Charles, La.
Tax returns and investment documents commonly go into the bin that goes to shedder. Thompson said it’s important to shred confidential information. The test for confidential is if the paper contains more information that the phone book shows, he said.
Thompson has been shredding since 2006 and goes through about 60 to 70 tons of paper a month and each ton saves 17 trees.
For information on becoming a chamber ambassador, call Paige Snyder at 409-963-1107.